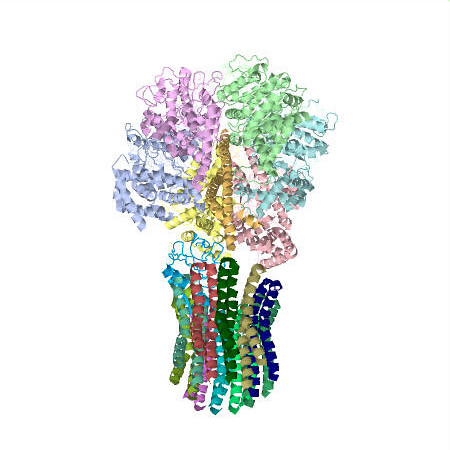 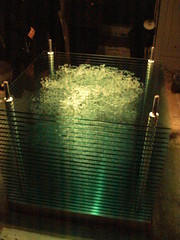 “I used this as the most resolved model with the right amount of detail. The stator and the unsolved parts of the molecule are not represented. This model was chosen for its complexity over the earlier fourier maps. It has been translated through various applications and finally rebuilt as a series of NURBS spheres one per atom that intersected with the planes, a Boolean difference operation has then been used to generate holes in the virtual sheets, these have been averaged, and turned into something resembling a stencil, then each sheet imported into the waterjet machine and nested for cutting, so I have had to alter the format of the information quite considerably so as to make this idea work, but have attempted as much as possible to keep the science as accurate as I could, by minimizing disturbance of positions of the atoms used however approximately half of the atoms are not represented”.

“I do not intend the work to be a model of the molecule. it is not intended to be an aid to understanding the structure of ATPase. More a sculpture responding to some of the conceptual and philosophical questions surrounding humanities search for understanding and our need to see and to construct models of the phenomena we are investigating”.

“The monumentality of the scale of the work is important also. it is deliberately one meter cubed, as this is the central measurement, close to human scale and fairly close to the mean of the between subatomic and cosmic and a reference for most spacial measurement. A meter cubed is also a sculptural scale, one that effects the viewer physically and occupies a volume that a human can relate directly to”.

“The glass does not represent anything explicitly, it it a vehicle for the image and the material properties are chosen to cloud the view in both the limited transparency of the standard normal iron float glass and the reflections generated in between the sheets. The gaps between the glass deliberately introduce these reflections to add a haze or a halo around the object. It is intended to be difficult to see detail internally, it is not about detail it is more about complexity, about what is and what is not fathomable by human thought. Semantically I wanted the image to appear ghostly, as if it was hardly there, a trace, something mysterious a metaphor for vision, and understanding”.