A Most Unruly Kind of Objects

This draft paper was presented in the session ‘Carnevalesque medicine’ at the annual meeting of the Society of Social Studies of Science, Pasadena, Ca., 20-22 October, 2005. If you cite this paper, please refer to the following url: http://www.corporeality.net/museion/index.php?p=261

I would like to start by saying a few introductory words about the background for this session. Because all three papers in this session relate to the work we are doing right now in the Medical Museion at the University of Copenhagen.

The Medical Museion has grown out of the Copenhagen Medical History Museum, founded in 1906. For decades generations of Danish doctors collected whatever they could lay their hands on from hospital clinics and medical research laboratories: Surgical instruments, x-ray machines, anesthesia equipment, and so forth. And today the former Royal Academy of Surgeons building 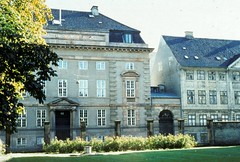 in Copenhagen houses around a hundred thousand material objects. Plus another hundred thousand pictures, and hundreds of shelf meters of archival documents — most from the late 18th to the mid-20th centuries.

We are now in the process of re-conceptualizing this place into what we call a Medical Museion. And this means three things. First (and this is why we use the old Greek word ‘mouseion’) it means that we transcend, being either an ordinary university research and teaching department, or, being a traditional museum. In other words, we engage in the kind of academic research that everyone is this room is familiar with, viz., to render the world of science and medicine into articles and books. But we also engage in the kind of scholarly activity that many science studies people are probably less familiar with, viz., to render the scientific and medical world in collections, and displaying these collections in exhibitions.

The other aim of re-conceptualizing the old museum into a Medical Museion is to bring our four major activities — research, teaching, collections and exhibitions — up to the very present, i.e., to recent biomedicine and biotechnology. From the research and teaching side this is not unheard of; after all this is what many STS-scholars are doing these days. But with respect to the collections and exhibition side, we are on quite untrodden ground. Because, with few exceptions, medical museum curators have so far not paid much attention to recent biomedicine and biotechnology (for many reasons, which I don’t have the time to go further into here). 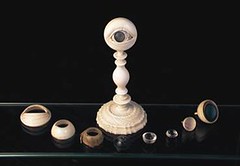 to the unruly and uncanny, the anecdotal, unique, curious, peculiar, monstrous, and even queer aspects of biomedicine.

One good reason for this interest in the ‘carnevalesque’ aspects of medicine, is that we already have a lot of objects, which immediately lend themselves to this kind of discourse, like these: 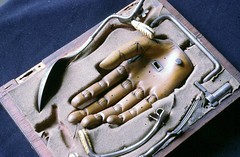 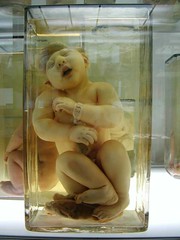 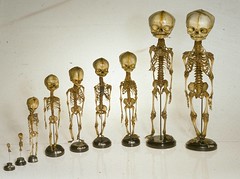 But we also have more articulated reasons for focusing on the peculiar, unique and unruly aspects of medicine — and it is these reasons we want to discuss in this session.

The following two papers (by Adam Bencard and Camilla Mordhorst) will explore the concept of ‘the curious’ and ‘the anecdotal’. And I will spend the rest of my allotted time on The Most Unruly Kind of Objects I think there are for science studies. I’m thinking of individual, unique researchers — and I am going to suggest that we should relate to them in terms of indeterminate singularites. In fact, in terms of ‘queer’.

I was animated to this paper when I read Alberto Cambrosio and Peter Keating’s book Biomedical Platforms from 2003. Keating and Cambrosio take a very clear methodological position, i.e., they state, emphatically, that they wish to take actors’ categories seriously. The category that they bring up in their book is of course that of ‘biomedical platform’ , which is different from the category I’m thinking of. But the methodological stance is similar, viz., to be responsive to actors’ categories.

The category I’m thinking of is that, which scientists draw on, when they use proper names and pronouns, which signify, somehow, the presence and importance of unique individuals.

The category of the ‘unique individual’ is one of those which science and technology studies have to a large degree dismissed. To use the words from the libretto of Händel’s Messiah, it has been ‘despised and rejected’. And it has been substituted by categories drawn from social science and cultural studies discourses (inluding the category of ‘discourse’ itself!). So science and technology studies have almost always focussed on ‘the social’ and ‘the cultural’ rather than ‘the individual’ and ‘the personal’.

There are historical reasons for this. Old-fashioned biography was one of the genres that the early STS-generations turned away from, and probably rightly so. (In fact, the privileging of the categories of ‘the social’ and ‘the cultural’ at the expense of the unique and individual aspects of scientific practice is part of the historical foundation of STS-studies.) If individual scientists have been considered at all, they have been described in terms of ‘actors’, ‘actants’, or ‘personae’, i.e., as individuals that play social or cultural roles, or carry social masks. But not in their unique individuality, their singularity.

This ubiquitous focus on the ‘social’ and ‘cultural’ aspects of science has of course had a lot of positive consequences, which I don’t need to mention here. But the flop side is that much of STS-studies seems to be at odds with the prevailing vocabularies among scientific actors themselves. After all, scientists speak a lot about unique individuals. And there is plenty of empirical support for this. In my own archival and interview work on the recent history of immunology, I have (again and again) been astonished by how common references to individuality were — both in the historical actors’ correspondence and in their retrospective narratives of what had happened. Informants were repeatedly uninterested in speaking in terms of social, institutional and cultural categories — they focused of individuals and their properties instead.

My experiences, as a participant observer of the biomedical scene over several decades, points in the same direction. Having visited laboratories, overheard lab-speak, participated in research and promotion committees, and so forth, I have been struck by the fact that the category of the unique individual, his or her life trajectory, individual career chances, personal attributes, etc., looms large in both academic and industrial research.

Some self-reflection supports the picture. When students of science studies speak together about our own field, our talk abounds with references to, and narratives about, individuals, their actions, motivations, peculiarities, etc. Science-speak is not much different. Experimental results are referred to as ‘his’ or ‘her’ results. Theories and hypotheses are seen as individual intellectual property, attached to proper names. Careers are evaluated on the background of highly individualised curriculum vitae. And even ad hominem arguments are much more common in lab-speak than philosophers would ever accept.

My point is that if we don’t pay attention to this, we are not taking actors’ categories — about personal motivations, ambitions, and feelings and unique individual experiences and appearances — seriously. There may of course be reasons for not doing so. E.g., I’ve heard the argument that metascientific discourse shouldn=t be contaminated by the mundane speak of scientists. But except for such arguments, I haven’t really seen anything but vague and inarticulated dislikes of focussing on individuals and their uniqueness.
So I see no reason why science studies should shy away from individualizing lab-speak. After all, the categories of ‘the social’ and ‘the cultural’ do not have any necessary epistemological priority over the actors’ individualist categories. The only reason for the alleged epistemological priority of ‘the social’ and ‘the cultural’ is, as I see it, the current academic Zeitgeist.

Now, lab-speak does not just focus on individuals, but more specifically (and more significantly) on their unruly aspects. In fact, individuals seem to be the most unruly kinds of objects there are in laboratories. Scientists believe that biomedical platforms are governable, that experimental systems are predictable, and that theoretical and physical objects eventually can be stabilised. But when they speak about themselves and their peers, they expect something different, viz., that individuals in science are innovative and creative — and accordingly, fundamentally undisciplined and unpredictable.

In other words, researchers (like science studies scholars) expect themselves and their peers to be performative rather than habitual. Deviant rather than ruly. Quirky rather than smooth. And in their self-understanding, biomedical researchers eschew the ruly categories which philosophers of science or science studies scholars try to impose upon them. They feel like figures in a novel rather than actors in a social field. And they refuse being contextualised in the way historians of science want them to be ordered.

In their self-understanding and in their expectations of each other, individual researchers thus fulfil all the characteristics of being ‘queer’. Not queer in the restricted sense used in gender studies, but in the generic sense of the term — as indefinite and un-classifiable.

A book title like Martin Duberman’s anthology Queer Representations (1997) seems to suggest they can. But, as one critic (Christel Stalpaert) points out, the combination of these two words is paradoxical — queer is that which cannot be represented, at least not in the ordinary meaning of the word representation. Because queer is “precisely the odd, the uncommon, the peculiar, the unusual, the strange, the curious, the indefinite”. It is, as Annamarie Jagose puts it, “necessarily indeterminate”.

To ‘represent’ — or rather to ‘render’ — queer, one would probably then have to move in the direction of what some scholars have called ‘post-representation’. In other words, to recognize the individual with something like what John Rajchmann, in his book The Deleuze Connections, calls “a ‘freshness’ of what has not yet been made definite by habit or law”.

I’ve been thinking about what that kind of ‘freshness’ could be. And I thought that maybe Henry Moore’s portrait of chemist Dorothy Hodgkin could be a case in point. Moore does not represent her as a scientist — and does not give any context whatsoever; he only displays her arthritic hands. Rather this than the portrait by Maggie Hambling in the National Portrait Gallery (even though she gave Hodgkin four arms to handle all the molecules!)

I would like to say much more about the different possibilities for a post-representational stance with respect to individuals in science — both in terms of textual, pictorial and material post-representations — but time doesn’t allow me to do so. Instead I will sum up the argument so far:

My basic issue today has been to introduce the notion of ‘queer’ individuality in science studies. Because it provides an opportunity to be true to actors’ categories. From my vantage point, what has been going on in science studies in the last 30 years, has been, among other things, a movement to get away from the grand biographical narratives of the great men of science. I believe the child was thrown out with the bathwater. True, Great Men do not populate much of science any more, and there is no need to re-introduce them. But ordinary men and women, with a lot of peculiar and curious and queer warts and all, do indeed populate science, and I think it is the job of medical research and museum institutions (like Medical Museion) — which wants to render and display the world of recent biomedicine — to take the unique individuality of at least some of these millions of researchers seriously: in collections, in writings and in exhibitions.