Medical museums that must be seen – part 3 Who’s afraid of the recent biomedical heritage?

Endo-Ecto is an interdisciplinary symposium on endoscopy and related themes organised by live artist Phillip Warnell (thanks to Centre for the History of Medicine, University of Warwick for telling us).

Presented by The Arts Catalyst, devised by Phillip Warnell — http://www.guestplushostequalsghost.com 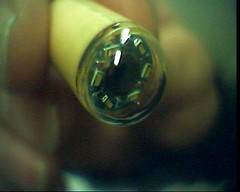 The fascinating capsule endoscopy procedure is a completely new technology, for the first time enabling the photographing of the GI passage in its entirety. In a two-part performative demonstration, artist Phillip Warnell will undergo a live capsule endoscopy medical procedure, integrating projected visual material from his project, Host, which makes use of raw material gathered in this way. In part one, and following a period of preparatory fasting, Warnell will ingest an untethered pill sized camera, which will embark on a fantastic voyage through the nine-metre gastro-intestinal tract. In part two, following a period of waiting whilst the capsule progresses via the bodies peristaltic, muscular contractions, the camera’s radio transmissions will be downloaded to a drive and viewed/interpreted by gastroenterologist Simon Anderson through a unique software interface.

Phillip Warnell is an interdisciplinary artist whose work is balanced between perception, event & documentation. Using the body as a sound or source image, it is distinguished by its attention: to detail, to technique, to humour, to scrutiny and to the complex relationship between live performance and the mediated image. Simon Anderson is a consultant gastroenterologist at St Thomas Hospital, London

Speaking in reference to her recent publication, The Transparent Body, Jose van Dijck will examine contemporary methods of disseminating medical images, arguing that these represent the embodiment of collective desires and fantasies – the most pervasive being the idea of transparency itself. Van Dijck will trace the wider social impact of such medical imaging practices as x-ray and ultrasound, distinguishing how the interior of the body has become a pervasive cultural presence, one that affects our view of corporeality and our understanding of health and disease.

Jose van Dijck is professor of media and culture and chair of the Media Studies Department, University of Amsterdam.

Bioluminescence researcher Anne-Sophie Cussatlegras will explain the incredible capability of certain organisms to produce light. Charting an array of techniques employed to achieve this, from symbiotic
inter-subjective exchange mechanisms through to internally produced chemical reactions, Cussatlegras will go on to detail her own research into the inscription and measurement of marine bioluminescence; finally giving an extraordinary live demonstration of the organic light produced by single-cell marine
dinoflagellates.

Anne-Sophie Cussatlegras is a researcher in bioluminescence at The Centre of Oceanography, Marseille.

Ric Allsopp will discuss the way by which performance can reveal hidden, concealed or overlooked aspects of individual or group behaviour, placing them within discourse, acting as a lens through which both subject and object are joined. What were considered visionary and imaginary entries into the individual body, associated, for example, with the traditions of shamanic, magical and theatrical performance, are now routinely materialized through remote imaging technologies, which can render the hidden interior spaces of the live, active body visible. He will argue that, once placed back into the live context, such techniques can reveal apertures that in turn disclose other possibilities or limits for our conception of the body (and the body politic) as a transforming and generative site of representation.

Ric Allsopp is a founding editor of Performance Research Journal and visiting reader in Performance
Writing at the University of Plymouth.

Writer and curator Lisa Le Feuvre will introduce and chair Endo-Ecto. Le Feuvre is curator of contemporary
art at the National Maritime Museum and a regular contributor to Art Monthly.

Artist and collaborator Richard Squires will co-ordinate the visual components of Endo-Ecto.