The return of Ivan Illich — and recent biomedicine

Remember Ivan Illich, the heckler of modern institutions? He was quite well-known in the 1970’s and 1980’s for his severe criticism of modern education (Deschooling society, 1971), and for his analysis of the problems of the medical institutions, especially the hospital system. In Medical Nemesis (1976) he suggested that the greatest threat to human health was in fact the medical establishment itself (i.e., iatrogenic disease). 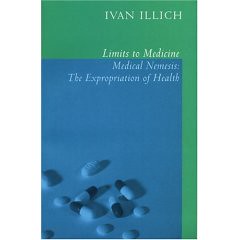 At the time Illich was never really taken seriously by the academic community, but his thoughts have formed a sort of subtext to much of critical history of medicine in the last decades. Maybe it is time to re-read Illich’s work in the present biomedical and postgenomic era, which sometimes seems to be characterized more by economic and bureaucratic rationality than by a disinterested search for scientific ‘truth’ or for the ‘authentic’ care of the patient.

Indeed this is what our history of medicine colleagues in Manchester are now proposing to do. Aya Homei is organizing a workshop with the title “History of Clinical Iatrogenesis – Before and after Ivan Illich”:

30 years after the publication of Ivan Illich’s controversial book Medical Nemesis, the Centre for the History of Science, Technology and Medicine at the University of Manchester, hosts a one-day workshop on the history of problems and diseases that are caused by modern medicine. Speakers include Professor Sir George Alberti (President of the Royal College of Physicians, 1997-2002), Dr Robert Bud (Science Museum, London), Professor Michael Worboys, and Professor Susan Lederer (Yale University).

The meeting is taking place on Friday, 19 May 2006 at the Centre for the History of Science, Technology and Medicine (CHSTM), University of Manchester, UK. See http://www.ls.manchester.ac.uk/chstm/events/conferences/iatrogenesis/