Why making the black box transparent?

Johannes Grave, postdoc at NFS Bildkritik / NCCR Iconic Criticism, Universität Basel (and who visited us with the Wandering Seminar in mid-May; he is sitting a step below Susanne on this pic) has sent us the following comment and photos of three objects which caught his attention when he inspected our collections and those in Cambridge and Munich:

1. Why making the black box transparent?

The Fourier analyzer of Walter Hoppe and Kurt Pannke (1956), now part of the rich collections of the Deutsches Museum, might be of special interest for a general discussion on the aesthetic and phenomenological status of scientific objects. The basic function of the analyzer was to produce images, or more precisely: to make structures of crystals accessible to our visual perception. So, it served to disclose features that were hidden before. But as an object out of its original context it “hides” this function: It does not show, why it was built and how it worked, but turns out to be a “black box”. 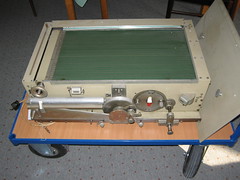 This way, the object opens a dialectical relation: In the past it made something transparent by visualisation, but then it became itself opaque. Freed from the restrictions of its original function, the object – to some extent – seems to be comparable to works of art, especially to the famous “black boxes” of minimalism, which strongly appeal the viewer’s attention, although their symbolic quality is reduced to a minimum. The dialectical relation between showing and hiding, producing and withdrawing can be regarded as the fundamental characteristic of the minimalist cubes. Thus, the viewer experiences visual perception as only partially controlled by him; he is confronted with irritations, that can lead him to question the common opposition between the pretended sovereign subject and the controlled object. Georges Didi-Huberman put it in the simple formula “Ce que nous voyons, ce qui nous regarde.”

The Fourier-analyzer of Hoppe and Pannke may allow similar experiences and, perhaps, raises similar questions. Scientific museums, however, tend to reduce the potentially irritating aura of their objects by putting them into well ordered structures, defining contexts and telling historically reconstructed stories. This way, they re-establish a secure distinction between subjects and objects, or, in other terms, they define things as objects.

‘But is this the only way to deal with “scientific objects”? Could it not be an option to prompt black boxes to open dialectical relations between transparency and opacity? Are there only linear, well-ordered narratives, told in front of distanced and controlled objects. Or should we allow these things to stutter and stammer different, manifold, sometimes incomprehensive stories by allowing them provoking multiple associations by the viewer? Such stories, perhaps, could indicate, that our perception is not that one-way-street we often regard it.

As an institution that defines itself by regimes of structures, orders, systems and comprehensible displays, the museum often shows similarities to characteristic features of classical art. Some older arrangements and settings of the Copenhagen Medical Museion refer obviously to traditional, “classical” modes of presentation: Long series of symmetrically arranged, technical instruments resemble exhibitions of coins, gems and other precious objects in art collections. A wax model, which discloses the inner structure of the female body, reminds of conventional iconographic formulas (e.g., the death of Lucretia) and is framed by wooden profiles. A partially mummified head with coloured venes and muscles is mounted on a classical plinth, which traditionally is used for busts of gods, heroes or famous men. 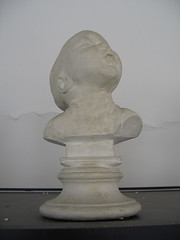 In the gynaecological section of the Museion, the use of classical plinths gains a critical quality. Two vitrines show an astonishing rich collection of conserved embryos and foetuses that are characterized by different deformities. These vitrines are “crowned” by five little plaster models of malformed embryonic heads, which were manufactured by the “Medizinisches Warenhaus Berlin”. By their origin from a department store, their classical formed plinths and their place on the top of the showcases, these plaster models represent a strange, but by no means unique combination of medicine, economy and popularized classical design.

Especially one plaster bust attracts our attention because of its posture of the head, which shows a striking similarity to classical sculptural representations of suffering mythological heroes, e.g., Laocoon or the sons and daughters of Niobe. In the late 18th century these works were in the centre of heated debates on the representation of emotions and pathos in works of art (J. J. Winckelmann, A. Hirt, J. W. Goethe). Laocoon and the Niobid group – sculptures, which were well known, because they were often reproduced as plaster models, – can be understood as exemplary works of art that serve to subdue and domesticate human emotions and sensations. The plaster bust of the malformed embryonic head not only resembles – to some extent – these works of classical ancient art, but it seems to aim at a similar project of domestication. It makes the malformed human head appear more familiar and allows putting it in a pre-ordered structure by mounting it on a plinth. Perhaps these parallels between classical sculptures and plaster models of deformities can be understood as an indication of an epistemological convergence between classical forms and the classic epistême that tends to an ideal of a totally transparent representation.

Why should we frame microscope slides? Scientists of the 19th century may have raised this question, when they came across decorative microscope slides, such as those preserved in the collections of the Whipple Museum of the History of Science in Cambridge. Probably, these slides were produced for interested amateurs and served to popularize science.

But possible economic and cultural motives of this practice of framing slides should not prevent us from having a closer look at one example, which contains a slice of the root of an elm. The ornamental frame of this botanical object contributes by no means to the original function of the slide. Put under the microscope, the decorative frame of the slide is irrelevant; it disappears. But in addition to this usual scientific view of the slide, the ornamental frame opens a second way of perceiving it. When the frame attracts our attention, we look at it without using the microscope. While the usual view through the lenses of the microscope constitutes a framed ‘image’ of a little part of the object, the ornamental frame makes the slide of the root appear as an integral whole.

But, this way, not only the perception of the root changes its character; the neutral glass sheet, we usually ignore, becomes a window that is framed and opens a view beyond its borders. Thus, the frame, which at first glance only seemed to be a neglectable decorative feature, causes an interference of two different, in some ways contradictory, modes of visual perception: the one optically mediated, only concentrated on the botanical object, the other directly perceptible, constituting a window by framing a glass sheet. In this context, the term ‘object’ is characterized by a fundamental ambivalence. It can mean the botanical object, the root of the elm, but can also be related to the slide itself.

Just for one moment, we should have a look at this window, instead of a view through the glass sheet. Only a frame allows a simple sheet of glass to be turned into a window. The window, however, is strongly connected with a fundamental concept of representation in early modern culture. Especially since Leon Battista Alberti called the picture an “aperta finestra” (De pictura I, 19), images were widely understood as windows that open views of a world behind or beyond the surface of the picture.

The microscope slide can be taken for a hybrid descendant of this tradition of pictorial representation. It presents an object in the framework of a window, but is not limited to the classical view through a window, since this mode of visual perception cannot open the differenciated and detailed insights, which make the microscope so attractive and valuable. So, the less old concept of getting insights in previously hidden microscopic structures of objects is struggling with the older ideal of immediate visual perception, which is directly related to the metaphor of the picture as “aperta finestra”. The ornamental frame, which at first glance stresses the transparency of the ‘window’, finally distracts our attention from the view through it, prompts us to have a look at the glass sheet itself and makes the microscope slide to some extent opaque.

(What do you think? Comments here or directly to Johannes: )