Is celebratory history of medicine on its way back?

Steven Shapin has written an excellent critical review (in London Review of Books, 30 November, pp. 31-33) of David Wootton’s Bad Medicine: Doctors Doing Harm Since Hippocrates (2006). In Shapin’s reading, Wootton’s book is a crusade against “the grain of contemporary historical writing” epitomised by the late Roy Porter; Wootton’s aim is to resuscitate the traditional medical historical project of identifying heroes and villains and distributing praise and blame. 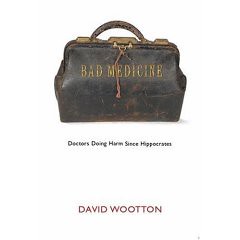 Shapin partly supports Wootton’s thesis; there has undoubtedly been a lot of progress in medicine over the last 200 years, and it would be foolish to deny this; furthermore “there’s no ‘logical’ flaw or ‘fallacy’ involved in writing celebratory — or for that matter, accusatory — history”; it “isn’t set in stone that you can’t write progressivist narratives”. After all, celebration has its uses: e.g., it can “give you confidence and make you feel good” (I guess he’s ironic here).

But by bluntly rejecting the last 30 years of medical historiography, Wootton flogs the wrong horse. There is already plenty of celebratory medical history out there, and the further diistribution of medals for achievements in the past reproduces the all-too-easily expressed spontaneous and popular historical impulse. To record, from cosy hindsight, which medical practices worked and which didn’t, is the easy way out and does not demand much of the historian. The real challenge is to find out how and why contemporary actors did what they did, without the scaffold of that cosy hindsight. As Shapin puts it: “if academic historians aren’t committed to understanding the past in its own terms, then no one else is very likely to do so”.

Yet there is another metahistorical twist to the argument (which Shapin touches on but doesn’t really take the consequences of). I’m thinking of the second-order cultural interaction between the spontaneous popular discourse of celebratory and largely unreflective medical history writing on the one hand, and academic historiography on the other. This relation between historical subcultures has its own history in turn. I see no point in using this history for distributing awards and assigning blames to the one or the other kind of historiography. True, Shapin says he wants to avoid playing judge when pointing out that there is no fallacy in writing celebratory history — but in the end he too cannot escape his own position and interest.