If Danish scientists/scholars are not on Google Scholar, they don’t exist? “Science & the Public”, Imperial College, 19 May 2007

Susanne’s recent comment to Søren’s post on the collection of MRI scanners a few weeks ago raises an important question about the ‘aesthetics of decay’. I.e., how do we handle incomplete, pillaged, delapidated etc. machines and machine parts, or as Susanne puts it: ‘ruins’? There is a lot of discussion about ‘the aesthetics of decay’ and a lot of photo material to illustrate it, e.g. this image that I found on Google Pictures, titled ‘rusted ambition’ 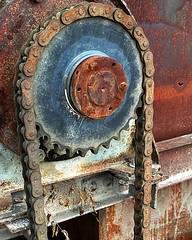 The ‘aesthetics of decay’ is not limited to machines. When Ion, Sniff and I were visiting the Tornblad Institute in Lund a couple of months ago to evaluate the scientific and cultural historical value of their embryo collection, we were utterly fascinated by a shelf filled with broken jars and glasses with embryos in different stages of decay (drying-out) etc., and we immediately thought of collecting, preserving (how do you preserve something that is a state of decay — do you stop the decay process, or do you let it continue?), and displaying it.

So I think such ‘medical ruins’ are potentially very fascinating objects. Should we reconsider the pillaged MRI scanner we were offered? And in case, how far should we go in collecting such decaying machines and bodies?

The discussion of decaying museum objects feeds into the topic of ‘biotrash’ and ‘bio garbage’ that Julie Kent, Naomi Pfeffer and Sarah Hodges are organising a meeting about in Warwick in two weeks from now, see program here.