The nanopump — a new icon of contemporary and future biomedicine

Since 2004 Medical Museion has used a common commercial microarray (Affymetrix’s GeneChip®) as an icon for our collecting and display efforts.

The GeneChip has many of the features that characterise the ongoing biomedical ‘revolution’: it symbolises molecularisation and digitalisation of medicine (at least in diagnostics) and it’s a fine example of the progressive miniaturisation of medical technology and clinical practices. Read more in this earlier post about the GeneChip as an exhibition artefact.

But I guess we are increasingly growing tired of the GeneChip. We have used it in literally hundreds of seminars and lectures over the last three years to illustrate the historiographical and museological road we are travelling on. So I think it’s time to shift iconic artefact (and also stop promoting, by default, a Californian medical technology company).

So here is another possible icon – the Nanopump™ invented by the Swiss firm Debiotech and winner of the Swiss Technology Award in 2006: 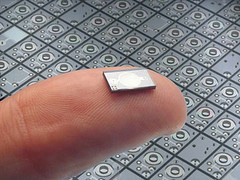 The nanopump has not yet been approved by health authorities, but is planned to be put into production in the late autumn of 2008 by the French/Italian manufacturer STMicroelectronics. The heart of the gadget is microfluidic MEMS (Micro-Electro-Mechanical System) technology (for technical details, read more on Debiotech’s website).

The clinical idea is, of course, that the nanopump can be discretely placed on the skin, or even implanted, and provide automatic and continuous delivery of drugs on bodily demand, for example insulin or pain killers (see animation of the mechanism here: http://www.debiotech.com/products/msys/images/mip/E042.SWF (right click to play)

The details apart, I think this is a medical artefact that embodies a lot of trends in the contemporary history of biomedicine: it is very small (nanotech), it it digital (MEMS), it routinises molecular therapy, and generally speaking it is a great example of converging (emerging) technologies in the medical arena. And in contrast to the GeneChip which is ‘merely’ a diagnostic instrument, the Nanopump is a therapeutic object that focuses our attention on the future possibilities of human enhancement.

So in many ways I think the Nanopump could be a pretty cool icon for our collecting and display ambitions. Unfortunately Debiotech won’t let us have one yet. I called them last week and asked if we might get a specimen for display, but they didn’t want to, because they’re afraid of industrial espionage :-). Fair enough, but I’ll be on their doorstep the very day they begin selling it.