I’m stunned by this picture which was recently published in the Danish medical weekly (Ugeskrift for Læger, 23 April 2007): 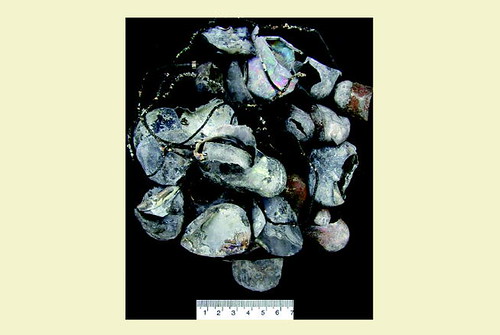 It’s not oyster shells — it’s the remains of artificial pacemakers found in the ovens of the crematorium of the city of Odense (Denmark) between October 2004 and July 2006. Heated to the high temperatures used in the incineration of corpses, a pacemaker will explode. The Zn/Hg batteries used in the 1970s and 1980s sometimes even cause damage to the ovens, while today’s Li/ion-PVP-batteries cause less damage (yet the staff will immediately hear when a ‘client’ with a pacemaker gets through the flames).

(The Danish medical weekly’s recommendation to its readers is: Remember to remove any pacemaker from the corpse before cremation. Today’s pacemakers are small and may be difficult to find in a superficial postmortem, so a diligent doctor who doesn’t want to cause damage to cremation ovens then has to read the deceased persons’ medical file carefully.)

I think these exploded pacemakers are in many ways excellent medical museum object, because they give rise to a variety of stories and associations. For one thing, they are rare curiosities rather than common mainstream objects (for the power of curiosities, see Camilla’s paper to the STS meeting in Pasadena in October 2005). Second, they add an aesthetics-of-decay dimension to the exhibitions. Third, they remind us not only about the increasing use of high-tech spare body parts, but also that this will make cremation a more and more complex practice.

And finally, these objects add another dimension to the soundscape of death. Not the explosions of guns that may eventually cause death, but the explosions that occasionally accompany one’s journey to final annihilation.