Google Books – disconcerting experiences Why are there so few playful biomed/biotech geeks?

Most of us believe that high-tech biomedicine and biotechnology are the only roads to better medical therapies in the future. Yet low-tech treatments also flex their muscles now and then. For example, News(at)Nature reports how creepy crawling maggots can be used to treat wounds infected by antibiotic-resistant bacteria in diabetes patients: 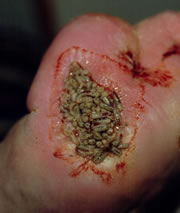 There are many other examples of succesful low-tech technologies. My favourite one is to use phone books against gastric acid reflux/heartburn. It goes like this:

Like millions of others, I have a problem with gastric juices that sip back into the esophagus because of a defective lower esophageal sphincter. Now, for years AstraZenaca has earned billions of dollars by selling their high-tech magic pill Losec (followed by Nexium) which works by lowering the level of gastric acid. A smart high-tech Big Pharma product, but pretty expensive — I used about 2400 DKK (approx £225) annually on the stuff.

But a couple of years ago, I found out that I could use gravity against the gastric juices instead of piling another two dollars a day on top of AstraZeneca’s already substantial profits. The trick was to put eight inches of phone books under the legs of the upper end of my bed. In other words I began to sleep in a slope. Now gravity stops the gastric juices from sipping back into my esophagus. No heartburn any more and 2400 DKK saved each year.

Why don’t someone write a handbook of low-tech medical therapies? Not the mumbo-jumbo of so called ‘alternative medicine’, but just plain, no-nonsense medical treatments. I’d bet there are more of them than you would immediately think.