Round-table discussion of art-science-tech relations (and launching Signs of Life: Bio Art and Beyond) The huge invisibles

Last December Koos Boomsma and I organised a symposium on evolutionary medicine (i.e., an evolutionary approach to understanding the origin of disease) here at the medical faculty in Copenhagen, with Randolph Nesse (University of Michigan) and Steve Stearns (Yale University) as keynote speakers, followed by a panel discussion with the audience. It was a well-attended meeting (some 100 students and 25 faculty) and we were all quite happy with the outcome.

Afterwards I’ve been thinking about how one could explore this aspect of contemporary biomedicine in an exhibition setting. It’s not easy, because it rapidly becomes very abstract (and mathematical). I haven’t even seen a natural history museum that is capable of making sense of evolutionary theory, whether in terms of didactics, cultural history or aesthetics. So we lesser museum mortals are sort of excused, I think.

What no museum seems to have thought about, however, is to make sense of evolution by contrasting it with its creationist counterpart. Creationists have recently started two museums on their own: the 6.000 square meter Creation Museum in Petersburg, Kentucky (where else?) which opened on May 28th, and the (much smaller) Big Valley Creation Science Museum in the small town of Big Valley, Alberta (Ca) which opened on June 5th (the noisy video on the Big Valley web site is much fun!).

So why don’t natural history museums make an effort to display creationism and so called intelligent design? Evolution would make so much more sense if it were contrasted with the (at least from a non-fundamentalist point of view) absurd creationist arguments and the way these people present ‘evidence’ (NO, I’m not a relativist when it comes to evolutionary theory!).

Same with evolutionary medicine. One could probably make much out of it in an exhibition context if it were contrasted with creationist medicine.

So is there, then, a creationist medicine? Well, a rapid search on the web gives almost no results. In fact, the best bid is one of Garry Trudeau’s Doonesbury strips: 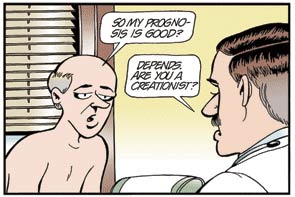 The whole strip is here!

So it seems like Doonesbury could be a good starting point for a museum that wants to use the creationist counterargument to make something interesting out of evolutionary medicine.