The first DNA image maker dies — who will make the iconic images of postgenomics?

Odile Crick — who drew the first image model of DNA for Jim Watson and Francis Crick’s original 1953 paper in Nature: 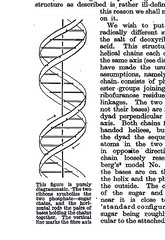 — has died at the age of 86, according to The New York Times today.

In a “brief interview” (one can imagine his impatience with the journalist), Watson recalls why Crick’s wife was asked to make the sketch: “Francis can’t draw, and I can’t draw, and we need something done quick”, and adds: “And it became historically important, reproduced over and over.”

Rightly so; as Terry Sejnowski, the present Francis Crick Professor (sic!) at the Salk Institute, points out, Mrs. Crick’s sketch has had “iconic importance beyond its scientific value; it came to symbolize man’s discovery of the biological basis of life and evolution”.

It’s an historical irony that the creator of the original iconic image model dies at at a time when DNA no longer serves as an useful icon of the life sciences. Everybody is simply fed up with DNA! The postgenomic picture is so much more complicated, and cries for other icons. So which are the images that may “symbolize man’s discovery” of posttranscriptional and posttranslational biology?