Curators using their sense of touch

Continuing on Søren’s post (and Adam’s comment) and further on last week’s post about the short paper that Jan Eric Olsén and I gave at the Artefacts XII meeting at the Norwegian Museum of Science and Technology in Oslo, 17-18 September:

In the second part of the presentation we asked two participants to join us in a demonstration to illustrate the importance of touch. Here are some photos from the session.

To the left I explain the demonstration procedure to the audience while the two blindfolded volonteers (Gerard Alberts, Universiteit te Amsterdam, and Robert Bud, Science Museum, London) are waiting to give sensory evidence (Jan Eric stands in the background). On the table in the right picture you can see two of the enigmatic instruments: a rectoscope (ouch!) and a knee reflex hammer. Robert is holding a wooden stethoscop between his fingers (see next pic). 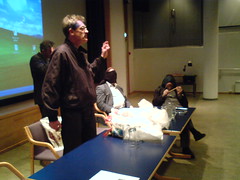 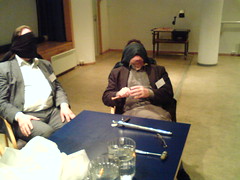 A close shot of Robert trying to describe the sensation of holding an approx. 1850 wooden stetoscope in his hands (he said it felt like something “plastic”): 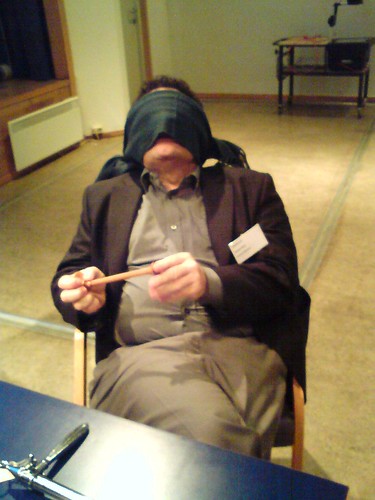 This short, and of course not very systematic, semi-public demonstration suggests that curators use another, more emotional, vocabulary when they describe objects which they can perceive by means of the tactile sense only. For example, Gerard used the word “dangerous” to describe an artifical hip (not on the photo).