Job opening for contemporary historian of molecular biology / biotech / biomedicine at Harvard Hope, trust and troubled dreams: Workshop on the history and public understanding of contemporary human genetics, Barcelona, 30-31 May 2008

Some bioart leaves me quite indifferent, especially that which is perhaps better called ‘biocraftwork’. Take the exhibition ‘Crystal Structures: Viruses in Glass’ which opened last Thursday at the University of Idaho Commons Reflections Gallery. It contains a number of beaded ‘models’ of viruses — including this ‘Purple Haze’ that is said to represent the Microviridae family 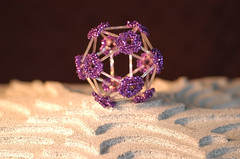 ‘Purple Haze’ has already been published on the cover of an issue of the Journal of Bacteriology, in the NIH Newsletter, and in the Washington Post, so it’s a good example of the usual ‘beautiful bio-pictures’-aesthetics. A few of the Wichman and Fane’s minisculptures “are meant to depict specific viruses” (representations?), somewhat like the delicate glass flowers which Raine Daston wrote about in Things that Talk (2007).

Most of the sculptures, however, just “explore a variety of viral structures with themes that range from the serious to the whimsical”. Thus some of the tailed bacteriophages are depicted as doll-like sculptures (for the fun of it?), reminiscent of art objects like Oron Catt’s tissue-engineered worry dolls, or some of the objects in the Museum of Jurassic Technology, or (especially) current knit- and quiltwork made to ‘represent’, somehow, macroanatomical structures.

Wichman and Fane also suggest that beading can sometimes help make their virological work better: “When Bentley Fane made his models of structures from T = 1 through T = 16, he discovered that some beaded structures were very stable, while others (T = 9, 12, 16) were quite unstable”. So in a sense they play around with physical models, like Watson and Crick did with their DNA-model, to see where the structural constraints are.

All this is fine, I guess — but it nevertheless leaves me pretty indifferent. Maybe I would be more engaged if I saw the actual physical work, because I very much admire craftwork (even beading). Their sculptures would be nice to have around in an exhibition on, say, invisible viruses. But would they contribute more than nicety?

(thanks to Cicada/Bioephemera for the tip!)