Bioinformatics and nanomedicine on display at 3rd International Festival for Arts, Sciences and Technologies, Prague, 8-11 November

Grab your mouse and click for a discount ticket to Prague later this week to see the 3rd International Festival for Arts, Sciences and Technologies (enter3), 8-11 November.

Some of the works displayed seem to be very relevant for our biomedicine-on-display-project, for example Linda Čihářová‘s Streptomyces installation where “science methodology meets artistic creation in ‘performative’ photography'”: 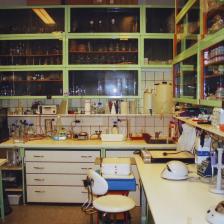 I decided to study the photographs of the Laboratory of Bioinformatics environment by similar tools which scientist use there to study Streptomyces bacteria. Their research is based on analyzing, modeling, and simulating regulatory processes in the cell and they use bioinformatics approaches, tools and databases to interpret the data. In my work I perform similar processes on several photographs made in their laboratory and from this semi-artistic, semi-scientific and even pseudoscientific method, I hope to gain a different view of the photographs themselves and the limits of the medium (quoted from this site)

Or this one (Pavel Kopriva, Nanoface): 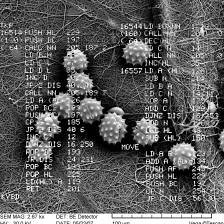 which he describes as a “new chapter of portrait history in the age of nanotechnology”:

Video and photography document an artistic experiment with nanofibres used in modern medicine to create artificial tissues. On the scale of the cell, small fibers are formed and the resulting nanoarchitecture is used to filter harmful elements. In the artwork, the nanoarchitecture is used for creating ‘artistic’ scaffold by actively changing the organization of nanofibres. The complicated technique of using electrospinning and the difference between the conducting and non-conducting base is used as a new type of portrait technique.