Containers in Biomedical Research: The case of laboratory animals

The ‘Archeology-of-contemporary-biomedicine-garbage-day’ at the Panum Institute last June (see previous posts here and here) produced a large amount of materiale that is still in the process of being curated at the Medical Museion. The objects collected are extremely varied, ranging from surgical lamps to spectrophotometers and from the early 1900s to recent years. Most items, however, are analytical instruments from the period from 1970 to 1990, and therefore a valuable contribution to Medical Museions collections of recent medicotechnical equipment.

Several of the items, however, are related to the use of laboratory animals in biomedical research, and several of them could be seen as containers intended to produce a more or less controlled environment in which to conduct experiments on the animals. The restriction cage seen below is an obvious example. 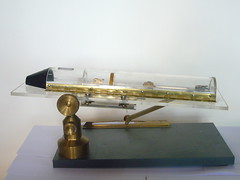 The restriction cage was constructed around 1980 at the Department of Physiology at the University of Manchester, and was brought to the Panum Institute by a Danish ph.d. student doing part of his research in the UK. The cage was used for experiments on renal clearance in rats, and several modified versions of the cage have since been produced at the Panum Institute. The brass framework allows the plastic tube to be turned, tilted and raised, and there are openings over and below the animal compartment for catheters. The tip of the tube is produced in black plastic intented to have a calming effect on the animal.

Another and much larger example is this modified Siemens Stabilopan therapeutic X-ray apparatus. 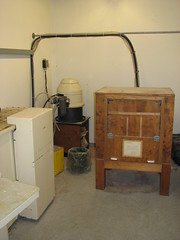 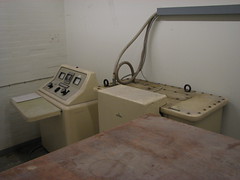 Originally installed at the Finsen Institute in the early 1960s and used in the treatment of cancer, the apparatus was moved to the Department of Microbiology at the Panum Institute around 1990 and modified to animal use. The modification mainly consisted in encasing the X-ray tube in a lead-lined box weighing several hundred kilos. 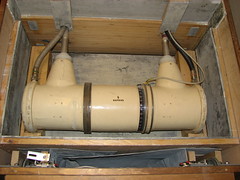 In a drawer behind a protective shutter, up to ten mice could be placed in a plastic cage and be exposed to X-rays for specific periods of time. 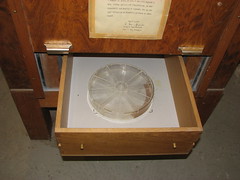 For several years, this was the only device for the irradiation of small laboratory animals in the Copenhagen region. In 2005, the apparatus was taken out of use as the use of more easily dosable gamma-rays became the norm. The modified Siemens apparatus was still fully functional, even though start-up required a certain degree of luck. When operating, the whole machine reportedly sounded like a fishing boat.

The x-ray apparatus was an appealing acquisition object partly because of its well-documented history. More importantly, the apparatus was interesting because of questions of scale and materiality. A machine weighing around a ton was needed to irradiate a mouse weighing 20g. And something the size of a room is needed to deliver imperceptible rays. In other words, the machine adressed questions that are central to the materiality of recent biomedicine, i.e. the miniaturization and gradual de-materialization of the empirical focus of much research, and the enormity of the equipment needed to interact with it. Perhaps containers, like the two described above but probably also like many other, work as tools to overcome such differences in scale, in intention, in necessary environments. They allow the passage of animals into research by forcing them into a form that is compatible with the research methods at hand. If that is the case then boxes, cages, vials, and tubes may be worth taking a closer look at in the study of recent biomedicine – and certainly an exiting target for future acquisitions.