How to disencourage the public to visit a medical history museum Bioinformatics and nanomedicine on display at 3rd International Festival for Arts, Sciences and Technologies, Prague, 8-11 November

I spent an hour last Wednesday at the Marian Koshland Science Museum in Washington, DC. It’s not a museum in the usual sense of the word: they have not one single artefact (neither historical nor contemporary). But I understand why they don’t want to call themselves a Science Center, because that term smacks of a building with herds of school kids running around pressing buttons to try make laser-illuminated giant plastic dinosaurs roar.

This is not what the Koshland wants to do. Owned by the National Academy of Sciences (US) they cater for educated adults who want to be informed about some of the important science-related challenges in our contemporary world, like global warming, infectious diseases, etc.

One needs at least a high-school degree to make sense of some of the texts and the advanced interactives. It’s not for the feeble-minded. But that said, the Koshland does it very well. 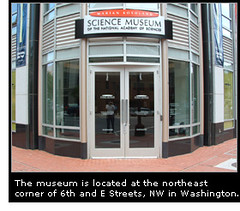 but with high-quality visual installations and some ingenious interactive visualizations of environmental and epidemiological data. Nothing is out-of-order, everything looks fresh, neat and new. The reason is of course that they are well-endowed: the late Daniel E. Koshland (some time editor of NAS’s Science and married to immunologist Marian Koshland) was one of America’s superrich (Levi Strauss jeans money).

Not a museum, not a science centre. Maybe Marian Koshland Science Exhibition had been a better name?