Bioinformatics and nanomedicine on display at 3rd International Festival for Arts, Sciences and Technologies, Prague, 8-11 November The museification of the world (reading Agamben’s Profanations)

One of the recent acquisitions of the Medical Museion is this copy of the PRECARD Version 2.1 risk assessment software. The software is used by general practitioners to calculate the risk of cardiovascular disease in the patients. Distributed freely in the form seen below, it was used by around 30% of all Danish GPs in 2003. 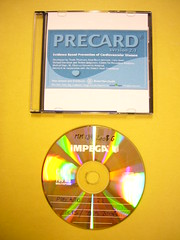 The software was developed by Troels Thomsen and colleagues at the Centre for Preventive Medicine at Glostrup University Hospital in Denmark, in collaboration with the Danish Heart Foundation. Initial funding was provided by Bristol-Meyers Squibb, who held exclusive distribution rights until 2002. The basis of the software were the results from large scale epidemiological studies conducted in Denmark, including the Østerbroundersøgelsen and the Glostrup Population Studies. PRECARD is the model for the HeartScore software, developed by the European Society of Cardiology, which aims to provide detailed risk assessment tools in the area of cardiovascular disease to European countries in general. At the moment, HeartScore is not able to perform as detailed risk evaluations as PRECARD since the Danish data for cardiovascular disease are more elaborate than elsewhere.

The software was collected by dr. Susanne Bauer as part of her research project “Mapping the visual and epistemic cultures of epidemiology: Individuals, populations, and the biomedical body” conducted at the Medical Museion as part of the “Recent Danish Biomedicine, 1955-2005”-project. In this context, PRECARD is an example of how information technology and visualization of epidemiological data are used in preventive medicine. Such tools may work to change the doctor-patient relationship towards joint decision-making based on probabilities, yet also enroll individuals into the logics of probabilistic health risk management.