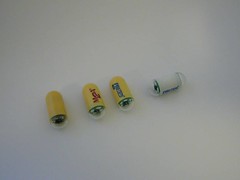 As it makes its way through the alimentary canal, the capsule endoscope takes up to 14 images per second, approximately 60.000 images all in all. The images are first transmitted to a portable receiver attached to the patient’s waist. They are then downloaded on a computer and processed into an endoscopic film, which is analyzed with the aid of special software.

Miniaturization and digitization are characteristic features of this new diagnostic technique. So is mediation. Besides its clinical recognition, capsule endoscopy has aroused extramural curiosity for its science fiction-like connections to popular culture and high-tech research. Whereas the 1966 motion picture Fantastic Voyage, depicting a manned submarine shrunk to microscopic size and injected into the blood vessels of an unconscious scientist, constitutes a point of historical reference, scientific reports on microrobots, which will travel through the cerebral spinal fluid, underline the futuristic aspects of the pillcamera. Nevertheless, for a miniaturized, digitized and disembodied technology of vision, the pill camera certainly provokes gory reactions. On Youtube it is turned into a spectacle, an electronic simulacrum of the messy body, repelling yet at the same time highly controlled. The capsule endoscope has been developed by the Israelian/North American company Given Imaging. These particular models have been generously given to Medical Museion by gastroenterologist Ervin Toth, head of the Endoscopy Unit, University Hospital Malmö, Sweden.