The Presentation of Self in Everyday Laboratory Web Life

Today The Scientist is presenting the winners of the first Laboratory and Video Web Site Awards. They started with 60 nominations (out of tens or hundreds of thousands of lab web sites on the net), then a select group of judges short-listed ten top sites — and now the winners have been chosen.

The result is intriguing! Most of the judges preferred an overcrowded and difficult-to-navigate marine biology website with tons of different features (moving images, cartoons, touristic animal photos, etc.). The editors of The Scientist chose a somewhat more sophisticated perception biology site — and the readers voted for this one: 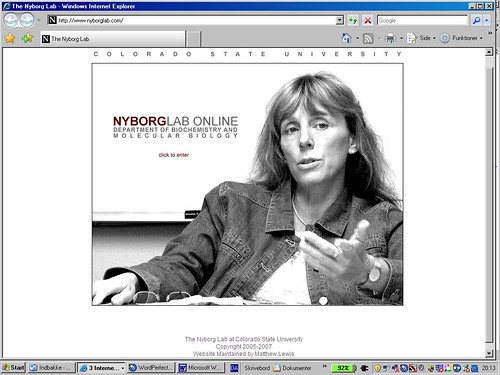 NyborgLab Online it says — but otherwise not much indicates that this is the site of a serious lab that focuses on “the function of the HTLV-1-encoded Tax protein and its role in transcriptional activation and leukemic transformation” and has a decent publication record. Could as well have been an ad for Levi’s, or Nyborg’s new album (or movie).

What’s intriguing about the readers’ choice of ‘Best of the Web’ is that it epitomizes two growing tendencies in the biomedical and biotech world.

One tendency is the focus on the individual principal investigator (PI). For several years, department websites have been subdivided into the lab websites of their individual PIs (i.e., the senior researchers above the postdoc level who run a lab with a grant from a major funding body). And such labs are almost always named after the PI’s (last) name: Johnson’s lab, Chandrasekhar’s lab, Xing’s lab etc.

This use of last names for lab web sites is an indication, I believe, of the strong individualistic character of biomedical and biotechnological research (at least in the university sector; pharma och biotech company labs is a different matter). And the NyborgLab web site underscores the point by displaying professor Jennifer Nyborg prominently as cover scientist — in a relaxed jeans jacket, her slightly blurred fingers indicating dynamic leadership.

The other tendency is that these flashy web sites is an indication of a rapidly increasing need for marketing and branding in the biomedical and biotech world. It is not enough to present content only. Laboratories (PIs, departments, universities) are competing for scarce resources from federal, state, and philanthropic funding agencies. Of course (hopefully?) intersubjective and disinterested peer-review plays the major role in selecting worthy projects for funding. But, web visibility surely helps!

(The title of this post is of course a pun on Erving Goffman‘s classical The Presentation of Self in Everyday Life, 1959)