The practice of using one’s own self and material from one’s own life is probably the rule rather than the exception in the arts and art museums. It is quite different in cultural history museums which, in the name of generalisation, have always tried to collect and display ‘the other’ (in space and time), and eschewed the auteur.

But then again. You don’t need to have worked long as a curator in a cultural history museum to realise that surprisingly many artefacts seem to have connections with the life and deeds of their curators; for example many exhibitions contain objects that belonged to the curator’s friends, family members, colleagues — and even themselves.

And if you take a closer look at some museums you will see that not only their artefacts but the curators themselves appear in their own exhibitions. For example, one of the objects in the new ‘Medicine Now‘ gallery at the Wellcome Collection in London is a tall book case 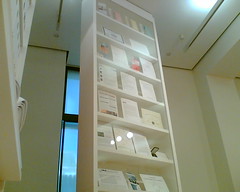 filled with analyses of DNA-profiles produced by a number of commercial companies for a growing market: you can buy pieces of jewellery with your own DNA-background, and so forth. 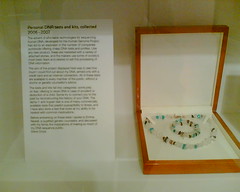 The DNA-analyses used in the book case are in fact made from one of the curators of the exhibition, Steve Cross. So what we actually see on the seven shelves is Steve Cross in a number of different varieties of self-exposure. He may have done this because he wanted to save time (it’s time-consuming to ask many people to deliver samples), or because he didn’t want to get into the ethical problems of using other peoples’ DNA — or because he actually wanted to use himself.

I must admit that I know the temptation. In the auxilliary exhibition ‘100 Light Years‘ by Liv Carlé Mortensen which is part of the exhibition Oldetopia here at Medical Museion, see former post), I happen to be part of one of the 16 collage portraits of Danish 100-year olds, namely that of my own grandmother (we used her as an example when we sent out the announcement to find 100-year old Danish men and women to sit as models for Liv’s exhibition).

Liv did research for the collagee portraits the hard way — she visited all the 100-year olds to take photos of them and of objects in their home environment. The collages were then built up as composite pictures of the sitters together with selected objects. In the case of my grandmother, Liv happened to take photos of some family portraits than were hanging on the wall in my grandma’s bedroom — and one of these family portraits is myself at the age of 5. It appeared in the colleage by pure accident (Liv didn’t know it was me) — but I accepted it, and now I am part of the Oldetopia exhbition (it’s me in the small framed picture in the middle): 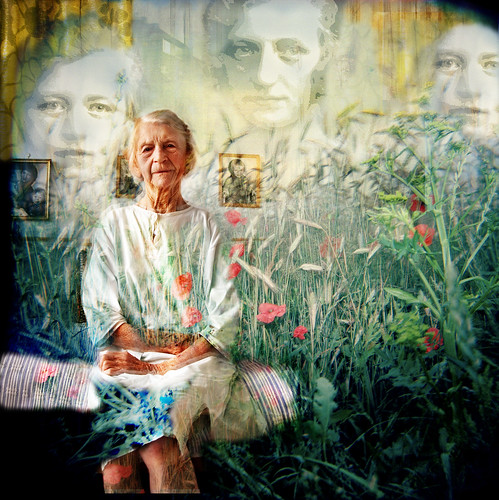 So, like Hitchcock appeared in his own movies, or David Lynch pops up in Twin Peaks, I have become part of one of the artefacts in the exhibition. I wonder if these two examples are coincidental — or if it is a tendency today to find new legitimate territories for self-referentiality. Just think of the blog phenomenon — composites of personal statements, private experiences, news and objective analysies. Is the blog culture creeping into exhibitions? Or is it the introduction of art in medical and cultural historical exhibitions that inspires to a more self-referential curatorial practice?