An exhibition about skin as an unstable interface between art, science, philosophy and culture PhD-defence: ‘History in the Flesh: Investigating the historicized body’ (Adam Bencard)

In the presence of meaning: the handling of a cremated artificial femoral head

This artificial femoral head was recently added to the Medical Museion’s collections. It was implanted in 1954 into a 50-year-old man suffering heavily from orthoarthritis. The operation left him 100% disabled and he lived with constant pains for the remaining thirty-three years of his life. Upon his specific request, the femoral head was recovered from the cremation furnace, the stainless steel now blackened from the intense heat. It was offered to the Medical Museion by a relative. 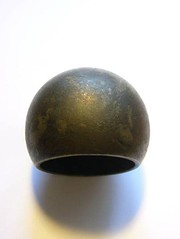 To me, this is an amazing object. Of course, there are several perspectives and discussions that we are able to adress through it. We have detailed biographical information about the patient, and could therefore recount the story of an upbringing and a professional life, that may have contributed to the development of orthoarthritis. The implant testifies to the development of total hip replacements, and to the history of protheses and assistive technologies more generally. The problems for crematoriums caused by the increasing number of artificial parts in corpses are well known (including the risk of exploding pacemakers, humeral nails, and, more recently, silicone implants). And finally, spare parts like these begs questions about the status of the biomedical body and challenges traditional ideas about age and ownership over one’s body.

Yet what struck me most about this object was the actual handling of it, my physical contact with it, and the presence it had to me. Of course, had I not known its full history, it would probably have conveyed little in the way of emotion and impact. But now that I did know, it felt amazing to be handling this object in the curating process. Surely, something was added to my relationship with this particular object by having a tactile, and not just meaningful, interaction with it. In an earlier post on this blog, Thomas advocated the collection of exploded pacemakers from crematorium furnaces for their meaningful, but also for their aesthetic, capacities. I definitely support this idea. I also predict problems concerning how to allow the general public to have this tactile experience with the objects on display, but surely there must be a solution to that. In any case, there will probably be a steady supply of such objects in years to come.