Is the ‘internet of things’, RFID tags and barcodes of interest for a medical museum? Or are museums better kept as Google-free zones? Presence effects in Liv Carlé Mortensen’s photo collages, ‘100 Light Years’

The Harvard Collection of Historical Scientific Instruments opens its Wayside website — nice iconography, but do they engage in copycat curating?

The Harvard University Collection of Historical Scientific Instruments (CHSI) has just opened its Waywiser website. As of today it only contains 764 records out of the total of 20,000 objects in the collection, but the database is growing with a few hundred records every month; CHSI Director Peter Galison says (in a circulated email on Mersenne) that they will also add films and archival material to the site as time goes on.

The site mainly contains physical and chemical instruments and some anatomical models used in the teaching of psychology at Harvard, but not many medical objects so far. Nevertheless, it is worth visiting for medical museum curators, especially for its good interface and picture quality, which lives up to current standards for public collection databases; for example, they use Zoomify to enable zooming-in and paning of the pics, and the resolution is so high that one really gets something out of the zooming function. Several objects are photographed from many different angles and in exquisite detail.

The site is not without problems, however. Unfortunately it doesn’t provide links to other related websites (when will historians of science learn to link?). And I also found a disturbing case of possible copycat curating. Here’s a screen shot of a record of one of the (somewhat atypical) items: 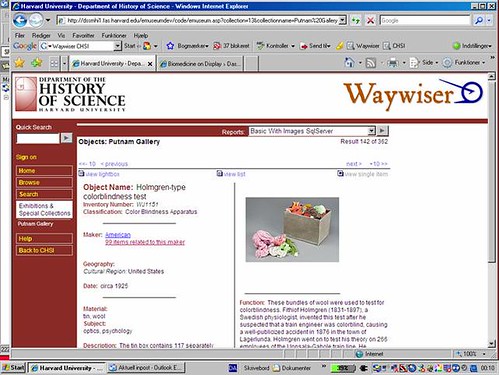 This test for colorblindness, a box with bundles of dyed wool in different colours, was invented by 19th century physiologist Frithiof Holmgren at the University of Uppsala, and became “a reliable and standard routine check for railway and shipping employees” in the early 20th century. Actually, postdoc Jan Eric Olsén here at Medical Museion published his dissertation about Holmgren’s physiology of vision a couple of years ago (Liksom ett par nya ögon: Frithiof Holmgren och synsinnets problematik, Lund 2005; abstract here).

I don’t know much about these bundles of wool — they look like a nice example of how low-tech scientific instruments can play an important social and cultural role (cf. David Edgerton’s The Shock of the Old) — so I made a quick internet search and discovered that the University of Toronto Museum of Scientific Instruments also have a ‘Professor Holmgren’s Test For Color Blindness’.

In fact the similar object in the Toronto collection is better curated. Their record describes in detail how the test was used, it puts the invention in its historical context, and, most importantly, it contains references to some relevant secondary literature. Furthermore — and this is what is disturbing — when you compare the two object records, it looks like the Harvard collection record is simply a resumé of the Toronto museum record.

Particularly striking is that both contain the same uncommon spelling error of Holmgren’s first name (Fithiof instead of Frithiof), and that both have misspelled the name of the railway line where Holmgren made his colorblindness test (“Uppsala-Gabole line”, should be “Uppsala-Gäfle line”). (On the other hand the CHSI curators haven’t bothered to mention the relevant secondary references.) In other words, it looks like the Harvard CHSI curatorial team has made a shortcut and simply condensed the text from the Toronto museum database without proper reference.

Hopefully, what seems like a case of copycat curating is not a general feature of this otherwise nicely designed and potentially important on-line historical instrument database, but a singular mistake in the rush to get the site ready for public introduction.

The possible copycat mistake shouldn’t draw attention away from the very fine use of iconographical material on the site. The Harvard Collection of Historical Scientific Instruments is to be congratulated to an overall good and useful product — and with some revisions in their curatorial procedures it may well set standards in the field.