Displaying gender constructions in contemporary drug advertisements Biomedicine on Omeka? Are we drawing closer to a blog-and-exhibition fusion genre?

A blog repository for bottled monsters — and medical curiosities

I’ve just received an incoming link from a newly founded medical museum blog called ‘A Repository for Bottled Monsters‘, edited by Mike Rhode, chief archivist of the Otis Historical Archives which is one of collecting divisions of the National Museum of Health and Medicine in the northern suburbs of Washington DC: 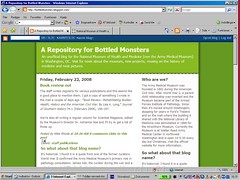 The title emanates from one of NMHM’s former curator-pathologists who wished to avoid having the museum (then the Army Medical Museum) seen as “a repository for bottled monsters and medical curiosities”, emphasising instead its role as a serious institution for pathological consultations. (I guess the identity of being a bottled-monsters-and-medical-curiosities-museum is one that all classical medical museums are facing whether they like it or not; they can hate it or embrace it, but they cannot really escape it.)

The subtitle—‘an unofficial blog for the National Museum of Health and Medicine’—has its own interesting background. The location of the museum on the Walter Reed Army Medical Center campus (“Home of Warrior Care”) not only makes it difficult to access it physically (see earlier report here); US army regulations also restrict staff access to the internet so that Blogger and other sites (maybe ours too?) are blocked by the army servers. Thus Mike works on this unofficial NMHM blog during off-work hours (when he also edits ‘ComicsDC‘).

Good luck with ‘A Repository’! The first posts cover medical curiosities (and normalities) more than bottled monsters, which I think is just fine. I guess many more aspects of medical collectioning will show up in future posts. And hopefully many medical museums will follow.