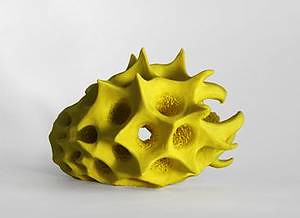 Matysik’s project takes it point of departure from the notion that gene technology will eventually lead to a radically new evolutionary stage which he calls ‘post-evolutionary’—in other words, that we can begin actively to design organisms. Matysik creates models of imagined future synthetic organisms, so called ‘Bionten’, which he believes will wipe out the differences between plants, animals and human beings.

(We are still speaking of art, of course. Even if the Craig Venter Institute say they are soon going to be able to do it, others, for example, Drew Endy in the newly formed Biological Engineering Department at MIT, believe this is a pretty difficult task.)

Anyway—the exhibition will open on 8 May and will run until 10 August. More info (in German) here.

For an earlier videodokumentation of the production of these artworks at Matysik’s institut für biologiske plastik (Institute for Biological Sculpture) at the Technical University in Braunschweig, see here.

(thanks to Ingeborg for the tip about ‘Biofakte’)