A propos the earlier post about Ingar Palmlund’s seminar on gender constructions in drug advertisements to be held in London tomorrow:  Mike Rhode has just posted a comment with a link to three posters covers of pamphlets from the collections of the NMHM which illustrate the gender construction topic very nicely.

(Note added in private and not necessarily representing the institutional views of this blog: Danish readers may note the similarity between the features of the face on this poster cover: 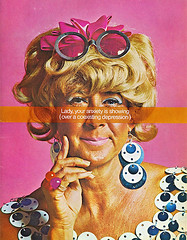 and that of Birthe Rønn Hornbech, the new Danish Minister for Refugee, Immigration and Integration Affairs from the so called Liberal Party (not to be mixed up with ‘liberal’ in the American political sense). Even more remarkable—given the fact that this Danish politician constantly has to steer a narrow course between common decency and the xenophobia of the influential Danish People’s Party—is the text on the poster: ‘Lady, your anxiety is showing’!)

Added 27 Feb: Mike has also put the covers on his blog.