This HeartMate XVE, a first-generaltion implantable LVAD (Left Ventricular Assist Device), was developed in the 1980s and cleared for use in the US and Europe in the mid-1990s. In Denmark, this so-called “mechanical heart” was first used at the Heart Center at Rigshospitalet in Copenhagen in 1998.

In 2006, Rigshospitalet shifted to the much smaller HeartMate 2, and by that time a total of 28 patients with severely impaired heart function had been equipped with a HeatMate in order to bridge the gap between the failure of their own heart and a cardiac transplant. 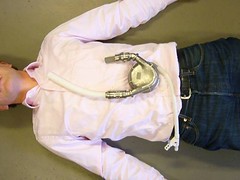 The HeartMate, which is basically a titanium electromechanical pump weighing around 1.6 kilos, is implanted into the abdomen of the patient. The two upper hoses are attached to the left ventricle and aorta, and the lower tube passes through the skin, allowing the pump to draw in air and to be attached to a control unit, two portable rechargeable batteries, and a monitor for inspection in hospital.

Patients have been known to be supported by the HeartMate for more than two years, and they generally experience a radical improvement in their well-being after the implantation. Some, especially younger, patients are reported to prefer a LVAD to a heart transplantation. 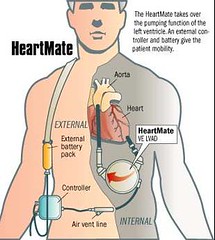 What is striking about the HeartMate, however, is the size, weight, and crudity of the apparatus. It simply looks like a piece of plumbing. The physical appearance obviously collides with the delicate and vital functions it performs, and certainly with the cultural image of the body part that it assists. Perhaps objects like this can work in a museum setting to exemplify the potential clash between ideas about the body and its parts shared by the public, and a more technical approach adopted by medical doctors?

Certainly, the sturdy metal casing of the HeartMate does not seem capable of incorporating the idea of the heart as the most precious part of the human body. And perhaps for that very reason (i.e. the tension between the idea of the heart and the physical appearance of the mechanical heart) this is an object that provokes instant reactions in those who engage with it. In that way, it is an amazing museum object.