Medical Museion on Swedish TV – Part 4 There are bodies everywhere …

Each month I’m eagerly waiting for my copy of The Scientist to appear in my mail box, because the magazine runs a page on an idea, invention or object that has been significant in the history of 20C life sciences (a kind of nostalgia page for scientists — very sweet). In the last issue staff writer Bob Grant presents an EL307 microplate reader from BioTek Instruments produced around 1981, a toaster-size thing that was sold in about 450 units at $3,900 a piece in the early 1980s: 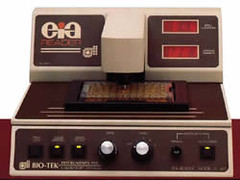 Nice, but also somewhat disappointing. Because Bob Grant apparently hasn’t seen one of this beauties IRL, only an image taken from a 1984-85 BioTek pamphlet. If The Scientist’s curatorial column is to be taken seriously, staff writers should have their hands on some real stuff, not just pamphlete images.