Joint university and museum PhD programmes is a great idea — but what about pre-specified phd projects? Medical Museion on Swedish TV – part 2

With a little help from our friends 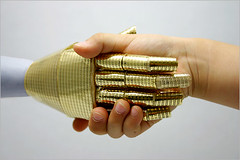 What role do the senses have in contemporary medicine and how can museums that wish to exhibit the material and visual world of biomedicine make use of sensorial approaches? These are questions that touch upon epistemological and phenomenological questions as well as matters of display and pedagogy. In order to find intellectual inspiration and sharpen our sensibility for biomedical objects, Thomas and I are attending the Five Senses in the Enlightenment conference, which will be held at the Eighteenth Century Centre, University of Birmingham, 17-18 May. As is generally regarded, the Enlightenment was a period in which the senses were given great prominence. Philosophers like John Locke and the abbé Condillac, made sensorial evidence the foundation of knowledge and experience. The sense experience of everyday life was also the core theme in the paintings of Jean-Baptiste Chardin. These examples may indeed seem historically and thematically remote from the molecular, intangible and highly mediated realm of biomedical research and practice. Nevertheless, we still think that a bit of anachronistic juxtaposition can generate questions and ideas of interest to both ourselves and scholars of eighteenth-century history. We therefore thank the organizers of this conference for letting us participate with a paper. The abstract follows here below.

Condillac’s statue re-awakened
Contemporary medical museums are steering a course between what Gumbrecht (2004) calls ’meaning-culture’ and ’presence-culture’, respectively. As curators of the recent medical heritage, including molecular an translational medicine, we wish to display historical artefacts by contextualising and attributing meaning to them; on the other hand we also wish to display them in a way that enhances their immediate presence-effects: interpretation and sensory appearance thus complement each other. To qualify our understanding of the sensory relation between museum visitors and medical artefacts, we are—in a shamelessly non-historicist fashion—turning to 18th century ideas of the senses to cultivate our own curatorial sensibilities (sic!). In Traité des sensations (1754), Condillac illustrates his post-Lockean theory of the senses with the image of a marble statue, which gains knowledge about the exterior world by way of gradual revelation of sensory input. While the sensations of smell, taste, sound and colours, endow the statue with a sense of being, it is only through touching that the statue becomes certain of external objects. If Condillac’s statue were to re-awake from its solipsistic isolation by gradual exposure to the world of contemporary biomedicine and biotechnology, what kind of sensations would it come across? Would it still find certainty in the sense of touch? Unlike the sensations that provided the Enlightenment philosophers with arguments, biomedical objects are not generally
commonsensical. However, despite their intrinsic molecular, digital and intangible structure, they’re not wholly indiscernible either. If airport security allows us, we will try to bring some artefacts to illustrate a 18th and an early 21st century Condillacean statue.