Anatomical Theatre — the hanging makes all the difference

Joanna Ebenstein, a NYC-based photographer and designer, spent a month travelling to medical museums throughout Europe and the US (see a list of visited museums here), to take photos of their collections of human remains and anatomical models, from the 16th to the 20th centuries. Her efforts have now been turned into a web gallery called Anatomical Theatre.

The images on the website are great (some have also been shown before on her excellent blog Morbid Anatomy). But it’s also interesting to contrast the web show (and the blog) with the corresponding physical photo installation in the Alabama Museum of the Health Sciences last autumn (you can see pictures of it in Joanna’s flickr-gallery here).

Placed in the rooms of the Alabama museum, the appearance of the images of these delicate old museum specimens changes drastically: 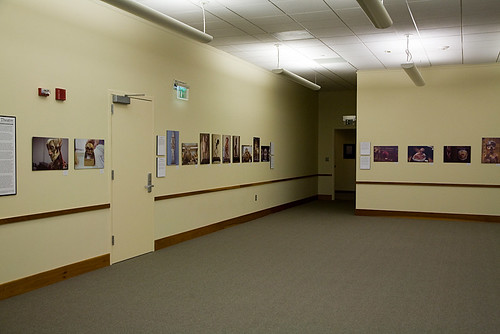 At first sight, this is a hopeless setting for a photo exhibit of early modern and modern anatomical objects and models; the beauty of the objects is squandered by the barren interior design. Just take a look at those lights!

But on the other hand — there are also interesting contrasts at play: 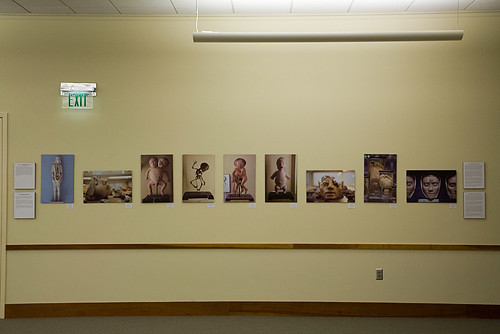 The choice of a room with cream-coloured walls, clinical ceiling light, and huge illuminated exit signs can be seen as the artist’s (unconscious?) protest against the ambience of authenticity and the artistic tastefulness which such images and artefacts are often surrounded by in their original settings.

So, the anonymous, near-clinical setting (this could be a waiting room in any hospital in the Western world in the 1990s) functions as a reminder of the original function of these artefacts and models. They were not made to please the aesthetic eye, they were made to be used.

In other words, the functionality of the room transforms these potentially aesthetically pleasing images to functional, clinical pictures. The hanging makes all the difference.

(pictures above from Joanna’s flickr-gallery)