It took the local university bookstore for ever to get my copy of famous molecular geneticist James D. Watson’s Avoid Boring People. Lessons from a Life in Science (Knopf 2007) ordered and shipped – so apologies for this late review. 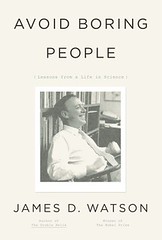 Like biographies, autobiographies are written and read for a multitude of purposes, from trying to settle priority disputes to producing a piece of literature. Watson (who shared the medical Nobel Prize in 1962 for his construction, with Francis Crick, of the double helix model of DNA, and then played a significant role in the subsequent triumph of molecular biology) has chosen another option. He has penned the history of his life in the form of a “recollection of manners” deployed to navigate in Academia. A self-help book for scientists and academics “on their way up”, as he puts it.

Consequently each of the 15 chronologically ordered chapters ends with a number of succinct “remembered lessons” statements with snappy titles, like “Have a big objective that makes you fell special”, or “Sit in the front row when a seminar’s title intrigues you”, or “Delegate as much authority as possible” — 109 altogether. Here’s one which I hope many colleagues in my generation will read and contemplate:

Never be the brightest person in a room.

Getting out of intellectual ruts more often than not requires unexpected intellectual jousts. Nothing can replace the company of others who have the background to catch errors in your reasoning or provide facts that may either prove or disprove your argument of the moment. And the sharper those around you, the sharper you will become. It’s contrary to human nature, and especially to human male nature, but being the top dog in the pack can work against greater accomplishments. Much better to be the least accomplished chemist in a super chemistry department than the superstar in a less lustrous department. By the early 1950s, Linus Pauling’s scientific interactions with fellow scientists were effectively monologues instead of dialogues. He then wanted adoration, not criticism.

One must admit that Watson has more often than not lived up to this particular advice. Last autumn’s row over his racist statements, during the promotion tour for this book, about the innate intellectual capacity of black people certainly didn’t bring much adoration.

But this aside, the self-help book format is an excellent idea. During the 19th century, scientific lives were often written and read for their instructive value, but since the beginning of the last century, self-help biographies and autobiographies of scientists have been virtually extinct as a genre. I find it hard to believe that Watson has deliberately chosen to rejuvenate this old practice, however, or even that he has been aware of the history of autobiography. His choice of this unusual format is probably rather a case of independent genre construction, and if so, it is yet another indication of Watson’s greatest personality trait: his independence and creativity.

I’m afraid this is all I can say in favour of this book, however. The rest of Avoid Boring People is a conventional, unengaging and, yes, boring autobiographical story. Too many banalities, too many unnecessary details, too few surprises. I read on, page after page, just to find out that nothing has really caught my interest. As we’ve seen so many times before, succesful scientists are not necessarily succesful autobiographers.

Even the “remembered lessons” are becoming somewhat trite. Admittedly, some of them are excellent, worth copying and hanging above your desk as daily reminders (“Two obsessions are one too many”, is my favourite one). But others are self-evident, or a trifle too idiosyncratic (like “Avoid gatherings of more than two Nobel Prize winners”, or “Spend your prize money on a home”).

And as the book advances you begin to realise that these self-help lessons are really of a quite different kind than those of the ancients. 19th century self-help biographies were aimed at cultivating the virtues of the reader, not his individual career and success. With few exceptions, however, these 109 Watsonian lessons are all about making it to the top. Many advices could as well be directed to a CEO, or a budding presidential candidate.

Generally, there is very much fascination with success and fame in this book, but very little evidence of Watson’s fascination with science. So little that, after having finished Avoid Boring People, I began to wonder if the famous Jim Watson has ever been really passionate about science. Or did he take up science just in order to make success and become a celebrity? Has his obsession with success excluded his obsession with science? And if this is so, is this really a lesson one wants to give on to one’s students?

PS: My hardback copy presents an enigma. The Avoid Boring People title of Watson’s autobiography is printed on the spine, in the front matter of the book, on the dust cover, and in the Library of Congress catalogue entry. But – in certain angles of light the title on the dust cover changes to ‘Avoid Boring Other People’ (not visible on the cover pic above). Which, of course, give an extra dimension to the lessons presented here. It’s thus not just a question of egotistically avoiding the bores of the world, it’s also a reflexive imperative: avoid boring them as well! But why is this printed on the dust cover only? And why is there no hint to this alternative title in the book? Has Watson okayed the dust cover copy? Or is it a joke of a Knopf editor?

PPS: It’s not the first time orders through our university bookstore are delayed; we’ll soon have to find another supplier.