Anatomical Theatre — the hanging makes all the difference What makes these things medical objects?

If I were an American I would probably have rushed to my computer already last Tuesday night to proudly announce on this blog that I and Medical Museion had been given Medicoprisen. The prize has been awarded annually by the industry organisation for medical devices in Denmark (Medicoindustrien) since 2001. The industry exports for more than 40 billion DKK per year, which is quite hefty, given the small size of this country (population 5,5 mill).

This year, the award was given for the work we have done here at Medical Museion to collect, preserve and display the medical industrial heritage. As you may have noticed, some of the collected artefacts have been displayed on this blog over the last couple of years (some of them are also displayed on our official website; in Danish only)

I didn’t rush to the computer, however, because in Scandinavia it is still somewhat suspicious to write too much about oneself (ever wondered why there are so few bloggers in Denmark :-). The Danish word for this is ‘selvfed’ which is not only untranslatable (literally ‘auto-obese’), but also a kind of behaviour which invites to a certain ridicule, so it has taken me almost a week of reeeally hard emotional work and much support from friends and colleagues to wrestle down my innate Jante Law censor.

After this ritual three paragraph opening caveat, I must admit that I’m quite pleased by the award. We have worked hard for several years now to turn this old museum into an institution that is more oriented towards contemporary medicine and medical technology. We are in the process of formulating a new acquisition strategy based on an awareness of the importance of medical industrial design both for the curation and the design of medical artefacts, and we are interested in opening up for co-operation between the university, the industry and the museum world. Our senior curator with responsibility for acquisitions, Søren Bak-Jensen (a specialist in the history of late 20th century kidney transplantation procedures) plays a central role in these efforts.

So here are some ‘auto-obese’ images from the prize ceremony. First, yours truly with the award, a small, but very solid (and heavy!) bronze sculpture by the Danish artist Peter Hesk Møller: 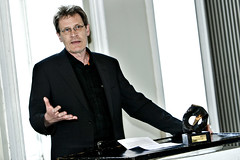 And then in conversation with Helge Sander, the Danish Minister for Science, Technology and Development, who handed over the award on Tuesday 6 May: 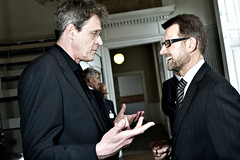 (there is a less flattering pic on our official website, as well).

(all photos by Michael Altschul, Visuel-medie)