The Age of Anxiety Making and sharing video tutorials

Is building a protocell to model early life on earth a topic for medical research?

Last week Nature carried a fascinating advance online article* written by a research group at the Howard Hughes Medical Institute (HHMI) and the Massachusetts General Hospital (MGH) lead by Jack Szostak. They have created a simple artifical protocell in the form of a single-stranded DNA-template within a shell of such fatty acids that were likely to have been present in early life environments four billion years ago. 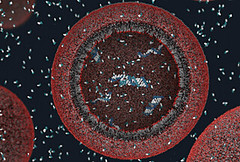 It turned out that this particular protocell could take up nucleotides from the outside without the help of ‘modern’ protein pores and channels and that these molecules then took part in the template-copying reaction. In other words, a precursor to a simple artificial life system. Read more here.

This is great stuff for everyone who is fascinated by the problem of the emergence of early life (and the construction of artificial life). But equally fascinating is the fact that this research is conducted by a group of scientists at the Howard Hughes Medical Institute and Mass General Hospital. This tells something about the open-minded research strategies of these two medical research institutions — a far cry from the narrow understanding of medical research (and research in general) which the Danish government and its research authorities have adopted over the last decade under the slogan ‘Fra forskning til faktura’ (from research to invoice).

I doubt that scientists in a Danish medical research institution (not even to think of a hospital) would survive for long if they focused their research efforts on the origin of life. Because even though such research may be very important for the understanding of cell functions in the long perspective, there is no immediate medical payoff; no cure for cancer or Alzheimer’s in sight whatsoever.