Participatory web media are increasingly being used for raising the medical scientific awareness of patients, caregivers and doctors (I guess this is the basic idea of ‘formation of biocitizenship’). Latest example is a video channel launched Monday by the Memory and Aging Center at UCSF in co-operation with YouTube:

with “the goal of promoting earlier diagnoses and getting more patients into research studies and clinical trials” (quote from the press release). 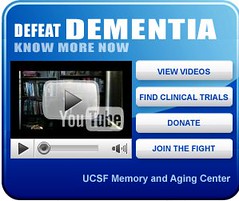 The UCSF people are also experimenting with two other forms of online communication. To the right you can see their widget with links to the YouTube channel and their own site.

They have also created a “Defeat Dementia”-group on Facebook.

Says the director of the UCSF Memory and Aging Center, Bruce Miller:

The YouTube channel and these other forms of online communications will enable us to engage a broad audience in the fight against these illnesses … One goal is to increase awareness about the earliest signs of some of the less well known diseases … If we can promote accurate diagnoses of patients, we can get them into clinical trials sooner

Looks like a very conscious strategic use of web media for the formation of medical scientific awareness. Expect to see much more of this kind from universities and research centers in the near future.