Most autobiographies of scientists are terribly boring—soulless accumulations of facts of hardly any interest for others than the near family combined with humourless vindications of the author’s inflated ego—best used as temporary cures against insomnia. 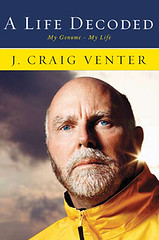 When I bought Craig Venter’s A Life Decoded (Viking 2007) more than half a year ago I didn’t have high expectations. A rapid look at the plates—with the usual mix of photos of the subject as a young man hiking with friends and as a mature man meeting other famous men—confirmed my prejudice about the genre and I left the book in the perhaps-to-be-read pile. Not even Venter’s commanding blue eyes on the dust cover could persuade me to open it again.

It would probably have remained stuck away if I hadn’t met Joan Leach at the PCST-10 meeting in Malmö last week. We had a short chat about autobiography and popular understanding of science and she mentioned that she had read Venter’s book and had found it “so bad”. Strong opinions use to trigger my curiosity, so I brought it on my summer vacation—and I must admit that I’m captivated by this exciting, elementary well-written story about the maverick who beat them all.

J. Craig Venter is probably best known to the public for being the outsider who won the race for sequencing the human genome in the late 1990s. The entrepreneur who invented the so called ‘shot-gun’ method which proved to be faster and cheaper than the official Human Genom Project consortium approach. The bad guy of genomics who left NIH to found two consecutive private research institutes (first The Institute for Genomic Research, then Celera Genomics) and allegedly wanted to make money out of patenting genes instead of giving the code to humanity.

Venter doesn’t try to diminish his maverick persona. If anything he inflates it. The basic story-line of A Life Decoded could be the manuscript for a Western movie. Venter portrays himself as the honest, outspoken, no-bullshit guy who was seasoned in Vietnam and who has defended fact-production and efficient science-making against a politically corrupt genomic establishment. He doesn’t try to hide his contempt for the big power players in the game, including Jim Watson, Francis Collins and John Sulston, their (in his view) political maneuvring and protection of institutional interests. His Penguin/Viking publisher has probably toned down some of the most acerbic character assassinations but there is still much left. One of the few scientists in a power position that emerges unscathed is the former editor of Science magazine, Donald Kennedy.

There is one important part of the public picture which Venter vehemently rejects, however, namely that he should have had any economic interests in the race for the genome. He argues over and over again that he wasn’t in it for the money; on the contrary, his move from NIH to the corporate world was, he says, the only way he could finance his scientifically and economically superior sequencing methodology and save it from being buried by the HGP politicians and apparatchniks. Accordingly, the villains are not just the HGP officials and Wellcome Trust bureaucrats like Michael Morgan, but also corporate executives who tried to stop him from generously publishing his gene data. The portrait of the profit-hungry head of PerkinElmer, Tony White, is particularly unflattering.

Venter has an axe to grind and he grinds it efficiently. After 300 pages, I’m inclined (without having had time to check his sources) to buy the main thrust of his story, from childhood to the present. Especially since Venter is not a lonely rider. He has bonded with other apparently honest, no-bullshit scientists and entrepreneurs who, like him, believe in the power of hard work and attention to detail, and who always put facts before politics. Venter certainly has his share of enemies, but apparently he also has droves of devoted collagues and friends who support his version of the story of the gene wars.

His knack for organising others to work for him is also reflected in the production of his autobiography. After having written some 240.000 words, i.e., more than twice the size of an ordinary book, Venter hired a Daily Telegraph journalist to help him trim and reorganise the text and to conduct interviews with other main actors in the story. His current fiancée gave him constant feedback, and several friends and colleagues, not to mention crew members of his famous yacht Sorcerer II, read multiple drafts. This doesn’t mean that Craig Venter has had a ghostwriter—it means that A Life Decoded is as much a team-work as the scientific projects he has led. The professional support-team is probably the explanation for why this is also an unusually well-written book: as literature (don’t forget that auto/biography is as much literature as history) it competes favourably with most mystery novels.

One feature of the book that works in favour of Venter’s version is the constant focus on the scientific and technical aspects of the work. True, there is a lot about politics in this book, but compared with many other autobiographies of scientists there is even more about science. Venter goes out of his way to explain the scientific and technical problems he encountered—from his work on the adrenalin receptor in the late 1970s and early 1980s to the jigsaw-like genome assembly in the 1990s.

Accordingly, long stretches of A Life Decoded are lucid introductions to bits and pieces of the history of biochemistry, molecular biology and genomics in the revolutionary quarter century from 1975 to 2000; an aspect of the book which in itself makes it obligatory reading for graduate students in the life sciences and for historians of contemporary biomedicine. It’s all told from Venter’s personal perspective, of course, like everything else in this strongly subjective story; but after all this is one of the limitations (and strengths) of the autobiographical genre. (Those who want another side of the story should also read John Sulston and Georgina Ferry’s The Common Thread, 2003.)

But first of all A Life Decoded is—personally, politically, scientifically—a book about passion in science. Venter describes his frustration when procedures and machinery didn’t function as planned, and he relates the feeling of exctasy and relief when things worked, results were pouring in, and yet another article—about the Haemophilus influenzae genome, the Drosophila melanogaster genome, the mouse genome, and eventually the human genome—was sent for publication in the most prestigious scientific journals.

Venter could have chosen to write yet another boring, self-congratulatory  autobiography. Well, it is self-congratulatory and there are many successes in this story to be congratulated. But in addition to the triumphs, Venter also invites the reader to share his emotional ups and downs, even the painful and depressive feelings and (rare) suicidal thoughts. Forget everything you’ve heard about life sciences as boring. Craig Venter’s life in science has been an emotional roller-coaster.

The impression of a man who is driven by the passion for scientific success rather than for institutional power is reinforced by the fact that this book, compared with many other autobiographies, leaves most of the dinners-and-meetings-with-important-people stuff out. When, on one occasion, Venter and his second wife Claire were invited to dine at Clintons’s table on a New Year’s Eve dinner, he summarizes the event in four lines, concluding that Hillary was “like a sponge eagerly absorbing what I had to say about the genome”.

Me too. I eagerly absorbed Venter’s saga in one reading session and I already look forward to the sequel. The man is only 61 years old and despite having a lot of bad genes (he did of course sequence himself!) and having been diagnosed with early skin cancer, he will hopefully live long enough to write the story about his present work too. His mapping of the microbial genome of the oceans and his new institute’s quest for artifical life promises to put even his 1990s genomic triumphs in the shadow. After these there will hopefully come even more exciting projects out of this man who seems to be genetically determined to live a life in competition.

An elementary exciting read for all boys between 15 and 95. So now I believe I understand why Joan didn’t like it 🙂