Le Laboratoire – art and science in Paris Conference on the politics of the life sciences (biopolitics, biocitizenship, etc.)

Yesterday I wrote about my experience of visiting Le Laboratoire in Paris. In Chapter 6 of his recent book Artscience (2008) the founder, David Edwards, explains the background for his art-science center.

The son of a chemist, David was trained as a chemical engineer, then continued to graduate school where he did theoretical fluid mechanics. After his PhD in the 1980s he took up a postdoc in Haifa where the first Intifada opened his eyes to the world outside theoretical chemistry. He started creative writing as a side chore and in the 1990s he shared his time between MIT’s writing programme and working in Robert Langer’s (this year’s Millennium Prize winner) biotech lab on drug-delivery through aerosols. The lab work led to a paper in Science, in 1997, that suggested a new and better method for manufacturing and distributing drug particles.

Like so many other biotech researchers, David used his knowledge to start a biotech company. The aim of David’s company was to deliver insulin in the form of the new kind of aerosol. It apparently went very well, because only two years later he and his co-founders sold to a big pharma company, earning a lot of money (“the largest accrual of value at the time in biotechnology history”), giving David, his wife and his kids enough to realise some of their dreams.

Armed with this new and unexpected wealth, David and his family established dual living in Paris and Cambridge, Mass. In both cities they created arts foundations for poor urban youth and David also founded a research lab at Harvard to study how his aerosol idea could be used in treating TB in the developing world. But even though both sides of his life were directed to alleviating the suffering of unprivileged people, he seems at that time to have considered them as separate activities. Art and science still didn’t mix.

Then, in the early 2000s, and partly as an outcome of former Harvard president Larry Summers’s attempts to restructure the university, David engaged in a series of meetings with faculty around campus and the surrounding professional schools. Surprised by the lack of mixing of cultures in what was nominally the combined Faculty of Arts and Sciences, he started to engage in conversations with artists and scientists about ways to achieve a creative fusion of art and science. (Why? Because he felt he needed some connection is his own life?) 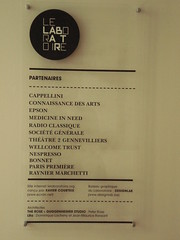 All these life strands came together in Paris. David found an abandoned film studio close to Louvre and started renovating what was to become Le Laboratorie. On top of his own personal investment, David raised the support from a number of institutional and private sponsors.

Initially he imagined it as a “spot where art and science might come together to address the global health problems touching youth”, for example, he invited musicians and choreographers to work with medical scientists from Africa and Asia on interpretations of health care to the poor. Then the scope widened: artist Fabrice Hyber collaborated with Langer on an artscience installation that would give the audience “the sense of being a stem cell transforming into a neuron”, a designer helped David create air filters that “made plants smarter at obsorbing noxious gases”, and so forth.

It is not difficult to understand David’s joy. Le Laboratorie was, he writes, “like the home I would not be asked to leave”. It seemed to him that:

to live at this intersection of the arts and sciences is the most meaningful work of all, more than the creation of a new business, the completion of a novel, or the startup of a cultural center (p. 157).