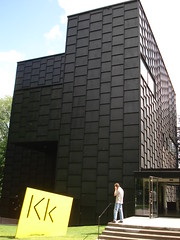 The city of Kalmar on the southeast coast of Sweden has just been endowed with a fabulous new art museum: Kalmar Konstmuseum—a tall, black, wood-covered concrete building hidden among the high trees in the old city park. Something like a hybrid between a postmodern fire watch tower and the Royal Library building in Copenhagen (the Black Diamond). The architectural innovation has received much acclaim, both in Sweden (e.g., here) and internationally (see last issue of Icon, not on the net yet)

In my mind, the most impressive of the three inaugural exhibitions is Swetlana Heger‘s ‘Smoke (Liberté Toujours)’—five collages of small photos of women, each and everyone of them smoking a cigarette. 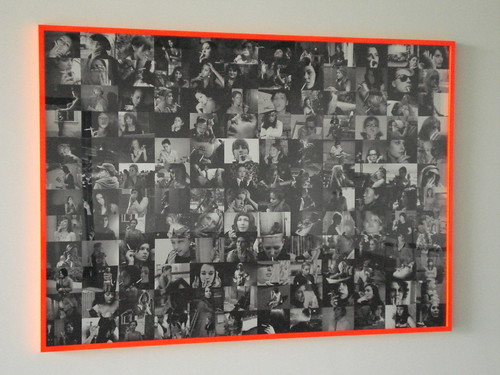 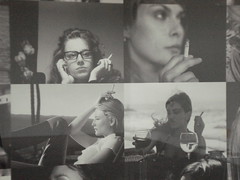 Never have I seen such a collection of images of beautiful, smart, independent, distinguished, alluring and gorgeous women devoted to the necessity of smoking. Never has the idea of the sublimity of the practice of smoking been expressed so manifestly in art. Smoking is most certainly addictive, disgusting and deadly dangerous. But it also aesthetically forceful. (This was the theme of Richard Klein’s excellent book Cigarettes are sublime, 1994).

The aesthetics, economy and politics of smoking is a difficult field. On the one hand, the health-care establishment, backed by strong epidemiological evidence, has really good arguments for intensifying the war on smoking, especially in the developing world. On the other hand, millions of smokers cannot be wrong, can they? People don’t just smoke because they crave for nicotine or are manipulated by tobacco advertisements. If smoking wasn’t a pleasure—and an aesthetically attractive (at least if you don’t kiss the smoker) one as well—nobody would buy these sexy little suicide sticks.