All 883 health and medicine blogs on display in one image (playing with Wordle – part 3) Human remains: from anatomical collections to objects of worship

What is artscience? And how can it support creativity and innovation? 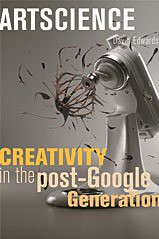 In an earlier post, I summarized the fascinating autobiographical story behind Harvard biotech professor David Edwards’s new experimental institution, Le Laboratoire in Paris. In his recent book Artscience (Harvard University Press 2008), Edwards tells about his education, how he was swamped with money after a short but succesful career as a biotech inventor, and how he was decent enough to use it for good and visionary purposes.

‘Le Lab’ makes a lot of sense from the perspective of his own life narrative. But Edwards has the ambition to raise above the particularities of his own personal trajectory, to make a more general argument for what he calls ‘artscience’, i.e., the fusion of aesthetic and scientific methods. He wants to foster ‘idea translation’, i.e., to bring innovative ideas between academic disciplines, and across academia, the corporate world, and cultural and social institutions; he wants to break down the ubiquitous organisational and institutional barriers to creativity and innovation. ‘Idea translators’ are people who happen to be ‘curious’ and above all have the ‘passion’ to traverse cultural barriers. And ‘artscience’, in Edwards’s view, ‘holds a special key to succesful, sustained idea translation’, because ‘art-science barriers are among the most intractable of obstacles in human organizations of all kinds’ (p.172).

One of Edward’s points is a variation of the old science studies theme (popularized by, among others, Bruno Latour), namely that ‘science in the making’ (the construction of science) is very different from ‘ready-made science’ (which we read about in journal articles and textbooks). For example, there is a lot of art and science in museums (and sometimes ‘art AND science’ which museums have good reasons for bringing inside their walls). But museums usually only tell the story of ready-made art and ready-made science (and ready-made ‘art AND science’), and rarely give their visitors insights into the creative processes behind art and science. Thus the ‘laboratory’ shall explicitly not be a museum. 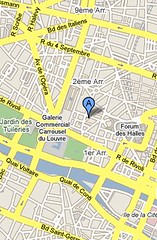 Le Laboratoire in the 1er arrondissement in Paris is the first instance of such an artscience laboratory (see earlier post here). It is supposed to become a site where ideas can be translated, where they can ‘accelerate’ and transcend barriers. In Le Lab the public is invited to experience the creative process that drives innovation as a fusion of art production and science production. Experiments by leading international artists in collaboration with leading international scientists are supposed to catalyze changes in cultural institutions, in industry, in educational institutions and in society as a whole. And more generally, by experimenting with the art-science relations in such specially designed artscience laboratories, we will somehow learn in practice how to break down the general institutional barriers that block creativity and innovations.

This is a grand and progressive vision. But it is not particularly well argued. Surprisingly, Edwards hardly refers to his best case (Le Lab) to build his case for ‘artscience’. He doesn’t really give the reader any insight into what ‘artscience’, ‘idea translation’, ‘idea acceleration’, ‘idea impact’, and so forth means in terms of his own practical experience. Instead, he spends almost half of the book telling the reader how other ‘artscientists’ have worked as ‘idea translators’ in their artscience practice. But his own artscience laboratory is peculiarly absent from the argument; yet Le Laboratoire should in principle be the best developed case of all.

Edwards might reply that this book is supposed to be read as a conceptual backing for Le Laboratoire (and that the Laboratoire experience may be told in a sequel volume). But if this is so, Artscience does not fulfil the aim, because the argument is not (at least not explicitly) grounded in the rich scholarly tradition for creativity and innovation studies. True, Edwards makes a few introductory references to great books about creativity and innovation, but after this initial respect-paying he does not engage with them, does not involve them into his argument.

In other words, Artscience sits between two chairs. On the one hand, Edwards wants to build up a general conceptual foundation for his Paris institution, but he does not back this up by any readings in the literature about creativity and innovation, only a handfull of journalistic interviews with ‘artscientists’. On the other hand, he wants to ground his notion of ‘artscience’ in practical experiences, but then avoids the single experience that would really convince the reader, namely his own institution in Paris. In both ways he fails to win the reader for his general cause.

A simple explanation for this may be that Edwards wanted a book ready for the opening of Le Lab, and thus couldn’t draw on his actual experiences. If so, I believe this was a miscalculation. It’s indeed nice to have an accompanying promotion book, but it would have been better to wait a year or two and use the Paris site as an example of the general ‘artscience’ mission.

This doesn’t mean that there is something wrong with Le Laboratoire. I’m quite convinced that this is a great idea, and that it can grow into one of the most important cross-disciplinary art-science scenes in Europe. But it is not the argument and the interviews with ‘artscientists’ in Artscience that convince me. It is rather the short, personal and passionate (in an endearingly shy sense) autobiographical story about how Edwards came to create Le Lab that convinces me, because here the author is on secure experiential ground. I wish he had expanded these 15 pages into a much longer autobiographical essay instead of the present conceptual elaborations.

That said, Artscience is a good appetizer for everyone interested in art and science, art and technology, art and medicine. As with all good appetizers, you finish it with a yearning for more rather than with a feeling of fullness and satisfaction. And that’s not so bad, after all.