Art and scientific citizenship (Why do museums want to bring art and science together? — part 6) Yet another argument for bringing art into science and medical museums (David Edwards’s Artscience, 2008)

Art is smart, art is chic, art is sophisticated (Why do museums want to bring art and science together? — part 7)

At last, here’s my final post in the series of rationalities for bringing art and science together in science, technology and medical museums. This one also has to do with the issue of identity formation (see last post), but now among museum curators. Here’s the argument:

In the eyes of the general adult public, STM-museums are usually perceived as either nerdish, unsmart, dusty, serious (in the bad sense), etc.—or childish. In other words, our kind of museums either appeal to specialists with a deep interest in scientific instruments or, more commonly, to children, especially if we display dinosaurs, robots, human skeletons, and so forth.

In other words, our kind of museums have difficulties appealing to a generally educated, culturally interested audience between the age of 16 and 96. Grown-ups rarely visit STM-museums, unless they are specialists or are accompanying children.

The remedy for this is art. Art is smart, art is chic, art is sophisticated. Art draws an adult audience and thus helps raising the prestige of STM-museums—from being collections for afficionadoses or amusement parks disguised as museums, to becoming serious (in the good sense) and respected members of the museum world.

This, I believe, is the major reason why STM-museums will soon begin to compete among themselves for all the exciting wet-art that is being produced right now—from Oron Catts’ tissue cultures to Shawn Bailey and Jennifer Willett’s Bioteknica stuff. Recent exhibition successes like Jens Hauser’s Sk-interfaces in Liverpool is setting new milestones for museums.

Summing up, these five rationalities do not exclude each other. They can operate simultaneously, in different degrees, in different museums. And the list can probably be made much longer. I would be grateful for hearing some other suggestions and arguments for or against some of these I have mentioned here, before I deepen the argument, put the appropriate footnotes in and write the whole thing up for the jopurnal Museum and Society (and doing so, I will consult Paolo Palladino and Adrian Mckenzies’s thoughts on bioart, which I have deliberately stayed away from in order to sort out my own ideas first).

Finally, as I wrote last week, this and the preceeding six posts on “Why do museums want to bring art and science together?” are parts of a paper I gave at the session “Rethinking Representational Practices in Contemporary Art and Modern Life Sciences” organised by Ingeborg Reichle for the Society for Literature, Science and Art (SLSA) meeting in Berlin a couple of weeks ago under the title “Five (good and bad) reasons why a medical museum director wants to bring art and science together”. The other speakers in the session were Suzanne Anker (New York) and Rob Zwijnenberg (Leiden) (see photo here).

And here is part of our audience a few minutes before we started the session: 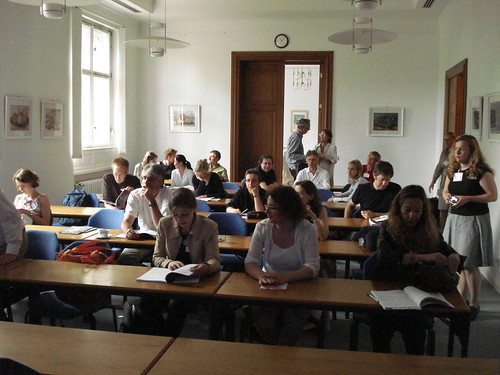