The history of aesthetics of prosthetics 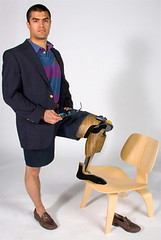 Today’s MedGadget relates how designer Joanna M. Hawley has created a design project for prosthetic legs inspired by the product line of (and co-branded with) the famous US furniture company Eames.

Hawley introduces her project with the statement: ”Prosthetics generally lack humanity, style and grace”. This is good and sympathetic point of departure for a creative design process, and accordingly her devices are beautifully designed.

But — is it really true that prosthetic devices generally have been designed and manufactured with little concern about aesthetics? Here at Medical Museion it took us only a few minutes search in our in-house historical collections to find several examples that disprove her statement.

The way prostheses have been produced has obviously evolved over time. Like other tools and equipment they have been produced with available manufacturing technologies and from whatever suitable materials were at hand. Most of the prosthetic artefacts in our collections are very well produced and show that much care and consideration has been invested in making them.

This prosthetic hand has a special history that dates back to the early 19th century. After the brave navy soldier Niels Therkelsen lost both hands in a sea battle on the coast of Copenhagen in 1807, the Danish king Frederik VI had a pair of wooden hands specially made for him. A short glance at the prosthesis reveals that this is a piece of delicate craftsmanship. Both function and aesthetics have been carefully considered. The ball joints allow the fingers to be maneuvered into positions that makes it possible to grab and carry items, and a set of tools –– spikes, a spoon etc. — can be fastened on the hand.

Here is another, more recent, example. The functional purpose of this hand is to look right. And it is indeed a very lively example that appears almost like a “real” hand – even the nails have been modulated with great care. One has to look carefully to see that it is not real.

I could give many other examples from our collections. Considerations of function, material, and form — or in Hawley’s words “humanity, style and grace” — are not missing in the history of prosthetic manufacturing. Materials and technologies have changed over time but prostheses have alway been manufactured with an eye both to their functionality and their aesthetic appearance. But Joanna M. Hawleys contribution is, of course, a very interesting continuation of this long story of how technology and aesthetics have been combined in the manufacturing of prostheses.