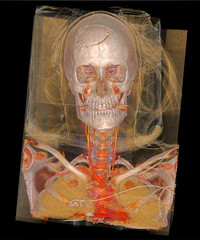 The 10th Lennart Nilsson Award for scientific photography has been given to Anders Persson, Director of the Center for Medical Image Science and Visualization (CMIV) at Linköping University in Sweden, for his techniques for capturing 3D images inside the human body. Persson and his colleagues at the CMIV produce the images by combining ultrasound, MRI- and PET-scanning images.

The technique, which is particularly useful for post-mortem imaging, has been featured on CBS’s Crime Scene Investigaton show. Says the award foundation in their press release:

Persson’s imaging methods combine cutting-edge technology with great artistry and educational value. He reveals the hidden mysteries of the body with unique precision, producing images that can be understood and interpreted by the lay public and experts alike.