Biomedical identity in a tattoo

Quite a few medical conditions can be seen on the visible parts of the body. Artists have sometimes used such disease signs to catch an individual’s medical identity — Henry Moore’s 1970s portrait of Dorothy Hodgkin‘s arthritic hands is a well-known example (see Patricia Fara’s article in Endeavour 2003, pp. 85-86).

If the condition isn’t visible, however, few people deliberately display their disease, its symptoms or its underlying biomedical causes in the public sphere. Few patients wear clothes, accessories or badges to identify themselves as, for example, leukemia or colon cancer patients — in contrast to how they would use a badge to announce their political sympathies. 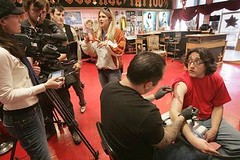 That’s why I was intrigued to see a recent example of how tattooing can be used to express medical self-identity. In an interview in the LA Times Health Section (8 Sept), Joshua Sandoval (MySpace profile here) says he tried to keep his Type 1 diabetes a secret for many years:

I realized I still hadn’t accepted the fact I was a diabetic. Sure, I’d dealt with the physical aspects — monitoring my blood glucose levels and giving myself multiple daily insulin shots, eating healthfully, exercising regularly — but I was still keeping the illness private. I still felt abnormal.

But at the age of 22, and to celebrate the 10th anniversary of the diagnosis, Joshua decided “to announce to the world who I am” by having a disease-specific tattoo.

Being “both a writer and a diabetic”, he settled for a quill sticking out of a syringe, a tattoo which would, says the LA Times reporter, “speak to his place in the world”. (Above is Joshua during taping for LA Ink, a reality show that follows the events at the High Voltage Tattoo studio, where also many Hollywood celebrities have their tattoos made.)

Joshua has generously sent us this pic that shows the details of the tattoo: 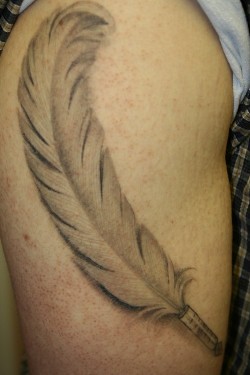 This very nicely crafted tattoo makes me think of two things. First, it is different from those with a biomedical motif, which we have written about before on this blog. In the case of ‘Therese’, for example, the DNA tattoo is used to announce her professional identity as a biology teacher. In Joshua’s case it goes further — he inscribes both his professional identity (the quill) and his defining biomedical identity (the diabetes syringe) in a joint symbol.

Second, some people may compare this kind of biomedical identity inscription with, for example, the brutal Nazi practice of tattooing Jewish camp prisoners to make their alleged biological/racial identity visible. I don’t think it makes much sense to make such comparisons, however. One is voluntarily and made as a token of self-empowerment; the other was enforced as part of a strategy of de-humanisation and disempowerment.

Has anybody seen similar expressions of biomedical identity image making?