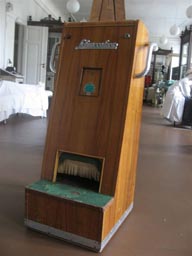 Imaging technology in museums is not just about sublime high-tech artefacts to be admired by the esoteric few. As Bente points out on our Danish parallel blog, one of our most popular imaging artefacts is a shoe-fitting fluoroscope (a “Schucoskop”), on display in our x-ray study collection.

The ‘Pedoskop’ as it was called in German was quite common in shoe stores in Europe and North America from the 1920s to the 1960’s. Customers stuck their feet (with shoes on) into the slot below and could then see an x-ray image on a fluoroscent screen from above. Many of our elderly visitors clearly remember having used such pedoscopes in Copenhagen shoe stores in the 1950s and 1960s. A nice evocative object which releases a lot of memories of times past. 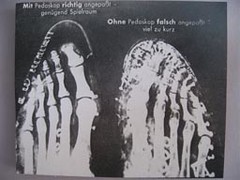 The text above the left foot says: “With Pedoskop right fitting — enough space”, and over the right foot: “Without Pedoskop wrong fitting — too short”.

As the awareness of radiation risks grew (see this paper for a risk evaluation), pedoscopes went out of fashion — in some countries they were outright forbidden.

One of the most conspicuous nonmedical uses of the x-ray was the shoe-fitting fluoroscope. It allowed visualization of the bones and soft tissues of the foot inside a shoe, purportedly increasing the accuracy of shoe fitting and thereby enhancing sales. From the mid 1920s to the 1950s, shoe-fitting fluoroscopes were a prominent feature of shoe stores in North America and Europe. Despite the widespread distribution and popularity of these machines, few have studied their history. In this essay we trace the origin, technology, applications, and significance of the shoe-fitting fluoroscope in Britain, Canada, and the United States. Our sources include medical and industrial literature, oral and written testimony of shoe retailers, newspapers, magazines, and government reports on the uses and dangers of these machines. The public response to shoe-fitting fluoroscopes changed from initial enthusiasm and trust to suspicion and fear, in conjunction with shifting cultural attitudes to radiation technologies.

(the whole article is available on JSTOR).