Impressions from Deutsches Museum (2) — live research in the museum 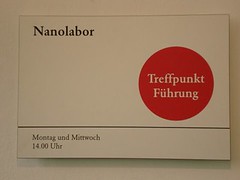 As I wrote last week, Deutsches Museum in Munich is an impressive colossus which also has its innovative moments.

The laboratory was initiated last year by the museum’s director general, Wolfgang M. Heckl, who also happens to be a professor in experimental physics and nanotechnology at the Ludwig-Maximilians-Universität München (LMU) — and in addition has a reputation for being a prize-winning and dynamic science communicator.

The staff working in the museum laboratory are actually research students in his LMU lab. Here is one of them sitting in front of a scanning tunneling microscope doing something for his dissertation work while I took a photo of him: 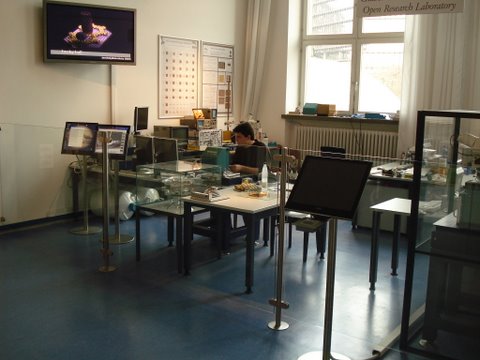 Heckl has described (in German, on the Deutsches Museum blog) the idea of the public  museum laboratory as a mutual learning process. Not only will the general audience get an immediate feeling of ‘the making of science’. By working in a public laboratory space his students will also begin to realize that the visitors may in fact be interested in the research process and that they will therefore have to learn to communicate their knowledge with non-peers.

What I think is essentially innovative about this project is Heckl’s idea that the open research lab is an environment that could contribute to creating mutual trust between science and the public. Visitors have the opportunity to ask the student researchers about their working conditions, personal motivations, life perspectives etc. In this way, Heckl suggests, young researchers may become realistic role models and ambassadors for science. And as a consequence, he believes, science communication changes into a dialogic process:

Accordingly, Heckl hopes that this new platform for science communication will result in a museum that involves the “co-production and understanding of objects” (“Mitmachens und Begreifens von Objekten”).

I guess that Heckl’s program for science museum communication will cause heavy heartburn to some museum directors trained as historians of science and technology. In fact, he doesn’t say a single word about placing nanotechnology in its cultural, historical and social context, and I can well imagine that his ideas aren’t particularly popular among the historians-curators at Deutsches Museum.

Nevertheless it sounds like an interesting and innovative way of creating a participatory element in our kind of museums. I, for one, would certainly not substitute the historical and cultural galleries with open research laboratories. But I would like to see some serious attempts to integrate our historical displays with some more direct and dialogic-oriented science-public interaction.

Open research laboratories in museums might be one way forward. Doesn’t have to be a nanolab, of course. It could be a working electron microscope lab, an imaging lab, a tissue engineering lab, a clinical chemical lab, or whatever — which is then somehow set in historical and cultural perspective.

Another way could be laboratories for historical reconstructions of scientific (technological, medical) work. Otto Sibum (now in Uppsala) and his co-workers have done some very interesting work along the lines of “an experimental history of science”. (The only problem with that approach is that it doesn’t contribute to establishing relations of trust between scientists and visitors, but between historian-curators and visitors — but that’s a problem to be left for a later post.)

(Open conservation laboratories is something else — they have been tried out, often with considerable success.)

PS: They also have a more conventional showcase with everyday products containing nanotechnological ‘stuff’ placed in the room where the ‘Gläsernes Forscherlabor’ is situated: 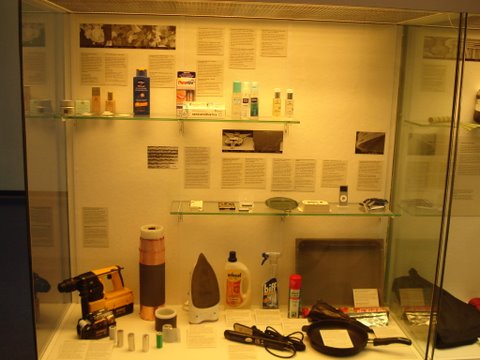