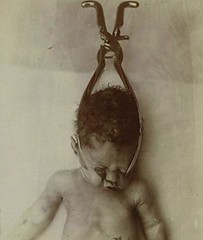 My good friend and colleague Jim Edmonson (who is Head of the great Dittrick Medical History Center and Museum at Case Western University in Cleveland, Ohio) sent me and some of his other colleagues an email the other day.

Jim tells the story about how one of his friends, an obstetrician and collector of obstetric and gynaecological instruments, has recently been in an auction bidding war against another collector, named Randi Joe Grantham. It turned out that

Grantham was bidding on destructive instruments (cranioclasts, basiotribes, curettes, &c, &c), and paying ridiculous sums for this category of instrumentation. Turns out, it was all acquired to be featured on his anti-abortion website — beware, it is not for the faint of heart: http://www.abortioninstruments.com/ (quoted with Jim’s permission).

I partly agree, partly not. Grantham’s web site is creepy, indeed, and will probably be used for all kinds of bad political purposes by the pro-life lobby.

But it’s also absolutely fascinating. If ever the word ‘sublime’ is appropriate, it’s here. Some of these instruments give associations to medieval torture instruments of the worst kind, like this one: 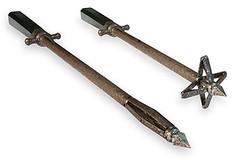 “This abortion instrument works by pushing the spike into the child’s head. Once it is inside, the button is pushed. When it flattens, you can pull the child out.”

The site also reminds me that the abortion issue is not a black and white thing. The debate is all too often divided in terms of absolute women’s rights (pro-choice) and absolute foetus rights (pro-life).

But there are no easy solutions here. My immediate impulse is to defend women’s rights over their bodies — yet one shouldn’t close one’s eyes to the facts of revulsive earlier abortion practices.

In other words, as much as I support the pro-choice stand, I also support Grantham’s rights to put these disgusting images on his web site — and also his moral right to overbid the obstetrician/gynaecologist collector.

So I don’t think Grantham is perverse, he just believes otherwise. I will forever struggle politically against him, but I don’t think we should ostracize him and his confederates.