Dissection as a rite-of-passage 100 years ago — what do medical students do now? 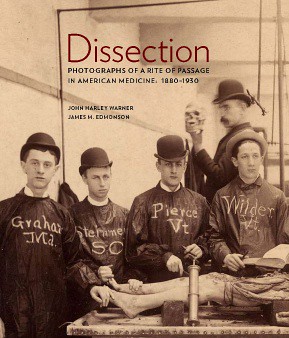 We are usually covering contemporary biomedicine on display on this blog, but sometimes older stuff gets its way into this column as well.

The occasion today is to draw attention to John Harley Warner and Jim Edmondson’s wonderfully illustrated book Dissection: Photographs of a Rite of Passage in America, 1880-1930, which has received very good reviews and other media attention, and has soared to Amazon rank #162.

To make their point, and not to be overwhelmed by too much material, John and Jim have wisely restricted themselves to medical schools in the United States around the turn of the last century — but images of similar practices probably abound in European archives and image collections as well. If I remember rightly, we have some of these in our image collection too.

There is a good interview with Jim on www.scienceFriday.com — listen to the podcast here.

Just a final thought. Now that human anatomy and dissection is no longer a core activity in medical schools — many schools have even dropped dissection on physical bodies and restrict their anatomical training to the virtual space — what kind of rite-of-passage, if any, has taken over? After all, micropipetting (a word that my speech recognition software does not recognise 🙂 is not a particularly evocative rite-of-passage practice.