Split and Splice: Fragments From the Age of Biomedicine — new exhibition at Medical Museion 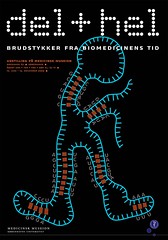 Last Thursday, we opened our new temporary exhibition Split and Splice: Fragments From the Age of Biomedicine (Danish: Del and Hel: Brudstykker fra biomedicinens tid) here at Medical Museion. In the next couple of days, we will hopefully be able to upload some images from the opening (depends on when Benny has sorted out the hundreds of pictures he took).

Until then — why did we make this particular exhibition? The decision actually goes back five years in time, to the spring of 2004, when we were beginning to restructure the old medical-historical museum here in Copenhagen — a task we were thinking of in three ways:

First, we wanted to integrate the practice of a museum (cultural heritage and exhibition making) with the logic of the university (which is research and teaching), in order to emphasise that a university museum like ours is a site of museological experimentation, a place where we do research in new theories and methods for museum science communication.

Second, we wanted to understand what is going on in medicine today — the recent merger between basic biological science, medicine and information technology. And third, we wanted to transcend the usual narrative and didactic exhibition practice which was (and still is) so common in museums of science, technology and medicine. We wanted to highlight the stunning visual and material culture of medicine. We wanted to focus on the immediacy and presence of the clinic and the laboratory (the phenomenology of biomedicine if you want) rather than just explaining and contextualising the results of biomedical science — something that other media can do much better. We simply believed that a more conscious aesthetic approach opens up for a stronger emotional engagement with the world of science.

We were so fortunate that a private research foundation (the Novo Nordisk Foundation) found these ideas interesting and realistic. So for the last four years, we have run a combined research, collecting and exhibition project — called ‘Biomedicine on Display’ — to explore aspects of the visual and material culture of contemporary biomedicine.

The research output of these four project years can be read in a growing series of articles in international scholarly journals (and hopefully, an anthology in 2010). The result of the collecting effort is a growing number of exciting, peculiar and evocative artefacts in our storage facilities here in the museum. And the public outreach, finally, has resulted in a number of exhibitions over the last three years — first, Oldetopia and 100 Light Years then Design4Science, and now Split and Splice.

To strengthen the experimental and aesthetic approach to biomedical culture, we asked Canadian artist and designer Martha Fleming, who has a strong interest in science and science museums, to be lead curator. I had met Martha at a conference in Paris in 2001, we then met occasionally over the years after, and in 2007 we organised a workshop and a conference about biomedicine, art and aesthetics here in Copenhagen. It was therefore quite natural to ask Martha to supervise our group of post-doc fellows in the ‘Biomedicine on Display’-project (Susanne Bauer, Sniff Andersen Nexø, Jan Eric Olsén and Søren Bak-Jensen) and transform them into a team of exhibition curators.

This also meant that we took the full consequence of our current search for new forms for public communication of medical science in a museum context. Split and Splice is not a historical or a didactic medical science exhibition — it is a 250 m2 sci-art installation. In other words, there are very few explanations and attributions of meaning in textual form, instead there is a strong focus on the material and visual presence of contemporary medical science.

Whether you will like it or not probably depends on what you expect from an exhibition in a medical museum. If you’re looking for explicit historical contextualizations and explanations for contemporary biomedicine, you would probably be disappointed. But if you are willing to let your mind and senses be stimulated by material surfaces, forms, colours, unexpected juxtapositions of artefacts, etc. you will hopefully like it.

As I said, we will get back with images from the opening and selected rooms and installations. We also intend to bring comments from visitors and others, and clippings from press reviews.