A while ago one of my friends went to Sydney to visit a friend who works in behavioral neuroscience. My friend was shown around in her friend’s laboratory and when she returned to Denmark one of the things she mentioned (with more fascination and dread than any other item from the lab) was the so called rat guillotine, she’d seen. According to her friend the guillotine was one of the most humane instruments for destroying the rats after the experiments.

The concept of a rat guillotine is likely to produce images of a tall narrow machine with a sharp triangular blade rushing towards an outstretched (rat) neck. A search in Medical Museion’s collections reveals another image, though: 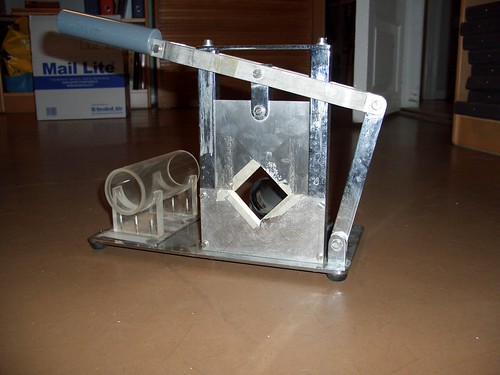 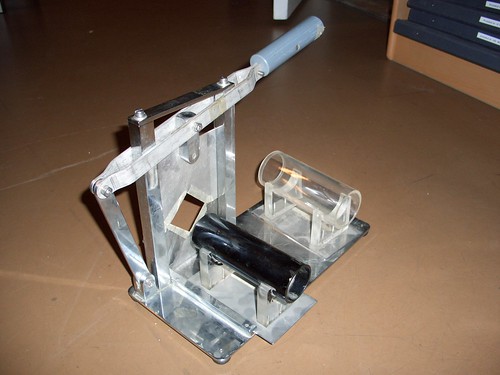 The guillotine in the picture was originally from the Department of Biochemistry at the University of Copenhagen. It was constructed ca. 1970 by the mechanic Henning Emmè (†1990).

The guillotine is a fascinating (if somewhat morbid) piece of laboratory equipment that can at the same time hint at the more gory parts of science and the relation between scientist and animals and also be used as an example of ‘home made’ laboratory equipment. As assistant engineer Kristian Karlsen told us, when Museion was at the annual ’clean-up-day’ at Panum, biomedical researchers in past and present have often had to construct their own equipment in collaboration with mechanics and engineers. He mentioned that at some point in the recent history of biomedicine at Panum there was one equipment-building workshop for every 4-5 laboratories. In other words, ‘home made’ laboratory equipment is and has been a more important and frequently used part of biomedical research than most people would think.

The ’clean-up-day’ at Panum resulted in a few of such items collected by Museion. For example this little machine: 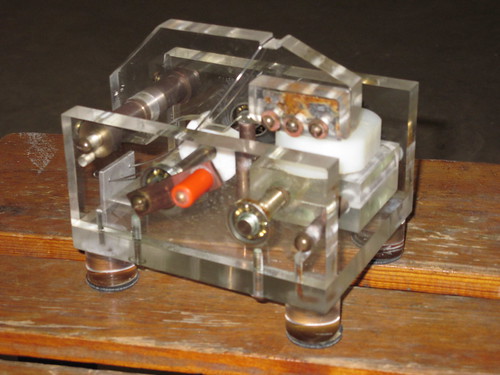 It is still an ongoing process to collect all the information we need about the item and its use. It came from one of the Department of Biomedical Sciences’ storage rooms and has most likely been used to slice tissue up for experiments (notice the slightly rusty razor blade over the white block). Like the guillotine this item has the ability to evoke curiosity in the beholder. It is clearly a unique ‘home made’ item. But how did it work? Who designed it?  And how exactly has it been part of biomedical research practice at Panum?

When more information becomes available, another blog post will follow up on this one. We’re right now in the process of communicating Musion’s collections online at the museum’s Danish blog, but will also post some of them here when it seems appropriate – new strange and interesting items may see a virtual light of day, so to speak, during the next couple of months.