Den hellige sygdom Are we on the edge of a robot revolution in medicine? 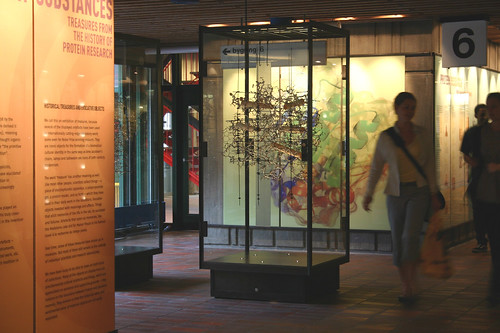 Yesterday, at last, we opened our new exhibition — ‘Primary Substances: treasures from the history of protein research’ — in the main building of the Faculty of Health Sciences here in Copenhagen.

‘Primary Substances’ is about protein research in the long time perspective, from the early 19th century to the present. However, the main focus is on analytical protein studies between the 1930s and 1980s, i.e., before the emergence of comtemporary proteomics.

The immediate occasion for the show was the newly opened Novo Nordisk Foundation Center for Protein Research (the exhibition has been paid for by the foundation; no strings attached!). But the scope is much broader, because CPR evidently stands on the shoulders of generations of protein researchers back to the late 18th and early 19th centuries, when proteins were first isolated and named as such.

It is this long tradition for protein research that the exhibition deals with. As we write in the introduction:

The word ‘protein’ was introduced in 1838 by the Swedish chemist Jöns Jacob Berzelius. He derived it from the Greek word ‘proteios’ (πρωτειος), meaning ‘first rank’, ‘primary’ etc., because he thought organic substances like fibrin and albumin were “the primitive or principal substances for animal nutrition”.

Since then, generations of chemists, physicists, physiologists and medical researchers have elucidated the structure of proteins and their function in the cellular machinery of the body in increasingly sophisticated detail.

Scientists from the Nordic countries have played an important role in the development of this truly crossdisciplinary field of research — not least in the invention of new analytical methods.

The keyword here is ’treasures’. ‘Primary Substances’ displays a rare collection of beautiful and historically important artefacts from the treasure chamber of 20th century biomedicine.

For example, the electrophoresis apparatus (borrowed from the Museum of Medical History in Uppsala), built by Arne Tiselius for the separation of serum proteins (alfa, beta, and gamma fractions), which contributed to his Nobel Prize in 1948. Another example is one of the first physical hemoglobin models (borrowed from the Molecular Biology Laboratory in Cambridge, UK), built from balsa wood by Michael G. Rossmann in 1959.

These are just two of the many precious objects in the exhibition representing highlights of the 20th century biomedical heritage. We also display parts of the original Kjeldahl nitrogen determination setup; lab noteboks from the early 1950s with paper strips showing the result of electrophoresis of amino acids; manuscripts by the chemist Kai Linderstrøm-Lang who made the distinction between primary, secondary, tertiary and quartenary structure of proteins; some of the first ampoules for the standardisation of insulin in the early 1920s; a 2D-electrophoresis apparatus plus gels from the late 1970s; two exquisitely beautiful models of the enzyme subtilisin, etc.

I curated ‘Primary Substances’ with the help of Jens Bukrinski, Adam Bencard, Laura Maria Schütze. We have had the pleasure to work together with the skilled Copenhagen museum designer Mikael Thorsted (see his portfolio here) and graphic designer Lars Møller Nielsen, both at Studio8. The extensive conservation work — you cannot really imagine how dirty and damaged some of these objects were when we borrowed them!) — has been done by Medical Museion’s Ion Meyer with the help of Nanna Gerdes and Siri Wahlstrøm.

Below are more pics (all photos: Mikael Thorsted, Studio8): 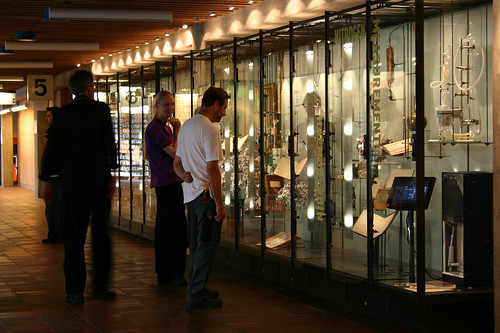 The core of the exhibition is a 14 meter long glass wall with 16 separate doors leading into a continuous showcase. 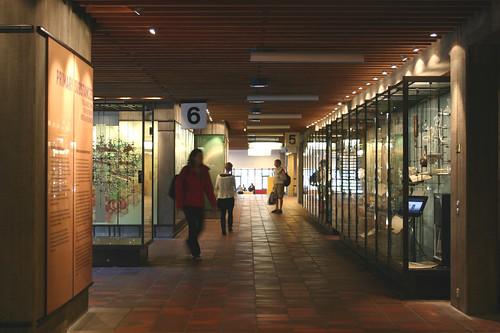 To the left is a row of glass panels for text and visuals, and in the small square room to the left there are two free-standing showcases, displaying handmade models of the enzyme subtilisin made in the late 1960s (borrowed from the Carlsberg Laboratory in Copenhagen). 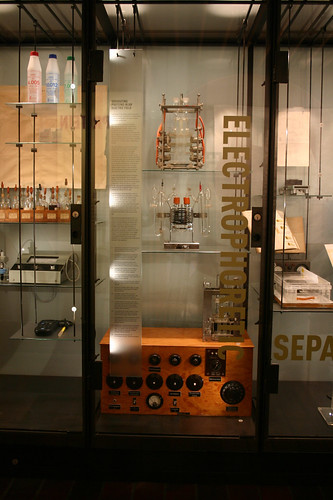 A detail from the 14 meter long showcase, displaying three electrophoretic separation apparatuses used by Arne Tiselius in Uppsala and Hugo Theorell in Stockholm in the 1930s. The bulky thing at the bottom is the power supply for Tiselius’ electrophoresis chamber (placed on top right of the power supply) 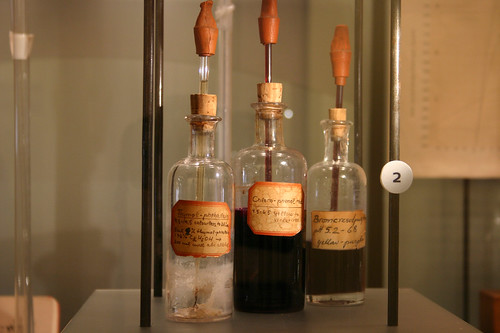 Three small bottles with pH indicators used by Danish chemist S.P.L. Sørensen at the Carlsberg Laboratory in Copenhagen in the early 20th century. Sørensen invented the notion of pH for hydrogen ion activity in the course of his studies of enzyme kinetics.

The exhibition is supported by the Novo Nordisk Foundation. You can see it in the Panum building, 3 Blegdamsvej, Copenhagen until the end of 2009.