A few weeks ago I attended the Science Online London 2009 conference – a conference on science communication in the new era of “the Web”. As they wrote on the conference homepage:

The Web is rapidly changing the communication, practice and culture of science. Science online London 2009 will explore the latest trends in science online. How is the Web affecting the work of researchers, science communicators, journalists, librarians, educators, students? What can you do to make the best use of the growing number of online tools?

The conference itself made good use of the online tools. As an apropriate feature it was possible to attend the conference online via Second Life (SL) instead of on site (in ‘First’ or ‘Real’ life). So I attended the conference while sitting in my living room in an appartment in Denmark, joined in virtual reality by people from various parts of the globe and quite different time zones. Blogger Dave Munger even gave his presentation through Second Life, as the screen picture below is an image of (notice also my freshly created SL avatar sitting in the lefthand corner): 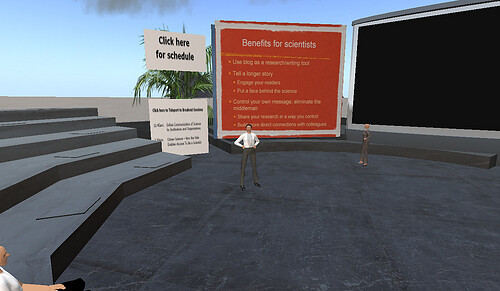 The Second Life feature in itself made the conference interesting, so let me start there and come back to the actual contents of the conference later. By doing this, I am also letting you experience one of the unfortunate aspects of doing conferences in Second Life: the technology is not only a media but also distracts you from concentrating on what is going on. Or in one case when there was only a bad audio available from a breakout session, it made attending the conference difficult. Then again, there were other benefits.

One major benefit (and major distraction too) was the ongoing commentary and debate going on in Second Life while speakers were presenting. The presentations were communicated by video and audio streaming (see programme and streams here), while powerpoint slides were visible on the virtual screen you see to the left in the picture above. Ad to this a chat browser with ongoing commentaries and an ability to rotate your view around the virtual amphitheatre that set the stage for the SL conference – to view the often very elaborate, fancily dressed avatars, whom you were chatting with – and you get an idea of the set up. Commentaries varied from quick resumes of what was just said to parallel discussions or sharing of links and jokes (like this one) – kind of like handing notes to each other during a lecture. This was really helpful for a newbie like me, and it also gave a feeling of inclusion and made a great opening for networking, since everyone spoke to everyone in the chat.

From a museum-outreach perspective the chatting also gave me a couple of unexpected examples of what SL can do. Chek for instance the HMS Beagle (Darwin) exhibit in SL: http://slurl.com/secondlife/Elucian%20Omega/175/103/23. Second Life may be a relatively small online community and you may need a lot of computer skills to pull something like the HMS Beagle off, but – for me at least – it opens up for a whole new perspective on the use of online tools in a museum context.

As for the actual content of the conference there were several interesting presentations: aforementioned blogger Dave Munger, science editor of The Times Mark Henderson and ‘Genetic Future’ blogger Daniel MacArthur talked about ‘Blogging for impact’, how to use the blog as a tool to achieve fame, present journalists with a good science communication opportunity, and further/damage your academic career. Basically saying that blogging is the future of science communication and of becoming a popular academic, and that comments are usually of a much higher quality in blogs than on the mainline web (please feel free to prove them right ;-)). But also that not all universities recognize this (yet), and that being publicly critical of collegues on your blog may damage your career. There was a breakout session on institutional barriers afterwards, but I’ll skip that here. See here for videos of most of the conference or here for a blog that has links to all the blogposts on the conference and its different sessions.

Another interesting presentation was on managing online scientific communities – both on the technical issues involved (tech support, spam, legal aspects etc.) and on building communities on the Web. Taking the online scientific community ResearchGate as a good example, the presentation stressed the need for learning from the community what their needs are, continously developing the online resources (search engines, interface, applications), and engaging visitors. 30-35% of ResearchGate’s registered users are active ca. once a month (doing literature search, asking a question etc.), so it seems they have found a productice way of making an online community. Knowing what your audience is interested in and would want to know about or be able to do seems to be the way of creating an actual community. Interaction and involvement are important.

The conference ended with a presentation by science fiction writer and former research scientist John Gilbey under the headline: Far Out: Speculations on Science Communication 50 years From Now. Gilbey not so much outlined a future of science communication as he asked a lot of questions relating to the current way things are heading. The questions also (kind of) summarized the underlying questions in, and pointed to the context of, the conference’s different presentations. While thinking on a concept like New Museology, these questions made a lot of sense to me, so let me just end this post with some of Gilbey’s questions:

In a changed future who will our [insert scientist/blogger/profession etc.] sponsors be? How free will we be? Will we be encouraged to deal with public by employers? Would you blog against ‘evil’ organisations anonymously?

Will virtual reality be an obiqutiuos part of science communication in the near future? Scientists’ location becoming irrelevant?

Would a future environmental event spur more interst in science? Or would society crash totally following an unrecoverable internet failure? How many would loose information they couldn’t recover?

Most of the persons in SL answered in the positive to these questions. Would you?